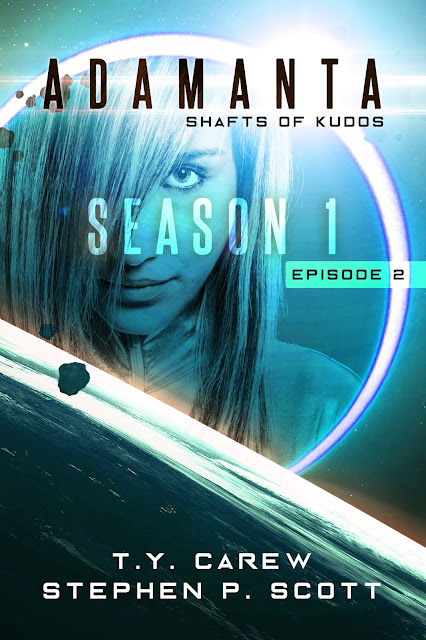 The mining shafts on Kudos have been producing increasingly smaller quantities of the mind-controllable Adamanta, but when you're fighting an undefeatable enemy you have to use every advantage you can gain.

Colonel Xander and his crew are there to secure as much of it as possible for the human military force. When an explosion traps three of the crew in the mine, the race is on to save them as well as ascertain whether the small operation is under attack from the formidable Beltine.

The explosion might have been written off as an accident if Marx, the Kudos safety engineer, hadn't found evidence of Xander's own transport pod having been rigged with enough explosive to destroy the whole mine and every breathing being in its vicinity.

Who would want Xander and his crew dead? And what deadly secrets does Marx harbor?

Doctor Willis started forward just as they were all thrown from their feet by a massive rolling quake. A sharp shockwave of air and the deafening roar of a blast accompanied the jolt. At once, klaxons began to sound throughout the facility at nearly deafening levels.

The big lights overhead swayed on their tracks and several fell nearby, shattering, throwing shards of polymer in all directions.

Xander struggled to gain his feet as rows of crops tumbled and some of the one hundred-gallon tanks of hydroponic solutions ruptured. A sudden wave of water flooded the floor of the greenhouse and toppled more plants and growing trays.

“We’re feeling heavy localized seismic activity!” Xander said, shouting unnecessarily. “I’d say it was an explosion. Are we under attack?”

“Not from anyone up here,” Tyra said. “I don’t read any bogies for millions of miles.”

“The mine!” Doctor Willis said, his voice quaking. “We’ve got to get to the mine.” He pulled himself to his feet and began picking his way through the damaged plant life.

“I’m coming down there, Colonel,” Tyra said. Xander imagined he could already hear her hands on the controls.

“No, not yet,” Xander said. “Until we know what we’re dealing with, I want you to hold position.” He followed along behind the doctor, leading his crew.

“I’d have known if anything happened to you, brother dear. I was worried about essential crewmembers,” Tyra said.

As the group pushed through into the large staging room for the mine, they were met with a heavy cloud of smoke, dust and gases billowing through the archway to the mines.

Doctor Willis made his way around a toppled set of lockers to a storage cabinet. “Breathing protection and hard hats,” he said, handing out gear.

The room was in pandemonium, with personnel rushing from every area of the compound. Xander accepted his gear and looked around at the chaotic scene.

“Doctor,” a lanky man struggling to don protective coveralls approached, “the mouth of Shaft One collapsed. We’ve got three workers trapped in there.”

“All right,” Doctor Willis said. “Let’s find Mister Marx and get his assessment.”

“And,” the man hesitated, but then pointed to a screen on the wall. “Molly is on the roster for this shift.”

Doctor Willis seemed to stagger, as if punched in the gut. He put a hand out and Mattie helped him to sit. “Molly is my wife,” he said. “She’s a master miner and ore specialist.”

A team of humans is willing to face almost insurmountable odds to save the human race from annihilation. But quite how safe from discovery and attack is the planet the research team has been secluded on?

Xander's new mission puts his crew into the path of a Beltine hive ship. No one has survived such an encounter before.

But then, no one else has highly skilled Adamanta-equipped fighters on board, either. Even so, choosing to pick a fight with the Beltine is not a clever idea. Will the humans make it out alive once they enter the lion's lair?

Join Xander, Mattie and her friends on this fast-paced adventure to find out.

If you want to make sure you don't miss out, you can sign up for our newsletter here.

This episode was written by Stephen P. Scott.

Stephen P. Scott brings a wealth of life experience, research and imagination to his writing--from the gender-bending sword and sorcery of Jordan's Fall, to the futuristic hit man of Serving Murphy, to the cannibalistic serial killers of the Eaters series.

The Adamanta project is all go now. The third episode is out on pre-order, and episodes 4 and 5 are almost ready. We're going for 6 episodes a year, and we have one slot left for this year, and of course, spaces from next year onward.

We have collated an Author Info Pack, which you can look through if you are considering contributing to this ongoing series. Genre: sci-fi. Length of episode: 20k words approx. Stay in the Adamanta world, but write your story. You have a core of ready characters, but can write your own and use as many or few of the original ones as you like. We'll need to keep the series consistent, but other than that you have space to play.

What we're looking for: good story, good writing, adherence to deadlines and a willingness to help promote the whole series.

Ask EllaMedler@papergoldpublishing.com for the link to the Info Pack if you'd like to have a look.