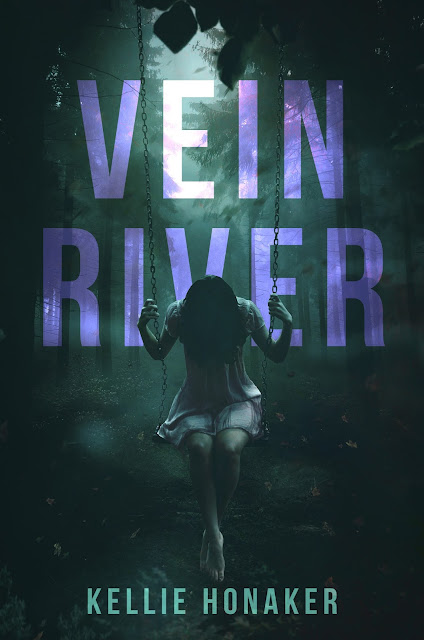 The locals of Vein River fear the covered bridge and avoid it at night at all costs. They say she hangs in the darkness, her long silk nightgown drifting in the breeze. She swings from a noose, her toes rat-tat-tatting across the hood should someone drive beneath her.

As legend goes, if you receive her withering kiss, you either die, get sick, or go stark raving mad. Your only chance of pardon is to kiss her dangling feet and beg for mercy.

The fate of the town rests on the shoulders of Annie Forrester, a sixteen year old girl with psychic powers.

Only Annie will have the strength to enter the bridge and face the evil head on.

Ed Meeker became a missing person that wasn’t actually missed. Local cops poked around and asked questions, but didn’t delve too deeply, in my opinion. He didn’t stay missing for long though, he washed up after three days. Some poor kid with a fishing pole caught what he thought was a hell of a catch. What he really caught was a few therapy sessions. Corpses are ugly, traumatizing things, especially those who died from supernatural causes.

I eat most of my meals at the Floured Fork because it’s too hard to cook for one. It’s depressing to cook for one, not that I was ever a pro at it to begin with. I’ve sat in this corner booth so much that the cushion remembers the curve of my rump. It’s my favorite corner at the far end of the restaurant, far from the bathrooms and the entrance. It shares a wall with the kitchen, and I like the heat that passes through the swinging doors each time a waitress makes an exit. You can hear the sizzle of the grill, the clash of pans, and the occasional swear word from the dishwasher. People avoid this booth for these very reasons, but I find the racket comforting.

Gretchen has scarcely refilled my coffee cup when a shadow passes over me.

I look up to find Detective Robbins. I’ve known him since he was knee-high to a grasshopper. Always was a good boy. He grew up in the house beside of mine, until he turned sixteen. His mother was a pretty thing; good natured, hard worker. A single mom that worked two jobs. She did a phenomenal job on her own, but when the lawnmower needed fixing, or the roof leaked, I made sure to help her out. I don’t mind helping those that help themselves. I even taught Robbins how to throw a curve ball on evenings when she couldn’t get him off the school bus. I don’t know if he ever regarded me as the father he never had, but I surely know how fond I was of him.

He slides across from me and waves to Gretchen. She brings him a coffee.

“How are you doing, Charles?” he asks.

“Just fine, how are you and the missus?”

He stares at me, tracing the rim of his coffee cup with his thumb.

I look him in the eye. “Something on your mind, son?”

“What do you think of them finding Ed Meeker?”

I shrug and take a sip of my coffee.

“You should have seen the body, Charles. It was horribly wrinkled.”

He waits for me to make eye contact before he continues.

“He was wrinkled just like you. The wrinkles were so identical, that I’d swear the two of you were twins. It’s true that bodies and water don’t mesh well, that’s a fact. But what I really expected to find was a bloated body, not a body that looked like it’d been shriveled in the sun. Three days in the water, Charles, and he was like a stick of jerky. How does that happen? It was a hideous sight, Charles, he looked like he died while he was screaming. There’s no way there’ll be an open casket. That’s why it’s odd, Charles, that’s why when we arrived, there was a ten-year-old boy vomiting on the edge of the river bank. A normal body wouldn’t have rattled him so. I think you know what happened to him, Charles, or at least you have a theory. You haunt that bridge just as much as the ghost you claim swings from the rafters.”

Robbins leans away from me as Gretchen tops him off. She’s on auto-pilot. She wouldn’t pay attention to a customer’s conversation even if we were planning an assassination. She makes off for the far end of the room with a plate of eggs. He leans back in closer to me.

“You were the last person to talk to him, your home phone called his, we have a record of that.”

“I had car trouble, he helped me out and I went on my way. I didn’t see anything.”

He nods his head as if he already knew.

“I think you did see something, Charles,” he whispers. “but I know that whatever it is you’ve got in that head won’t fly on a legal document. So, I’m not going to ask you what you saw.”

I want to smirk and glare at the same time, but I keep my poker face.

“Now, I’ve never seen this so called ghost that you’ve been morbidly obsessed with for the whole of my existence. I don’t believe in it, either. I’m a man of facts. I don’t solve cases with mumbo-jumbo. I think you know exactly what happened. I think you lured him to the bridge in the hopes that your pet ghost would scare him to death. I’m not sure what you did, but I know you did it. I can’t say that I blame you. There’s a long line of people that would have loved to kill him. Do you know what the coroner said he died from? Old age. Forty-five years old and died of old age. What do you think of that, Charles? Now that doesn’t look good on paper either. So I’m going to tell you what I’m going to do. I’m going to pull some strings, have it written up as a heart attack. Everybody knows that Ed was a dick. He kept me busy with all the riffraff. Quite frankly, I’m glad he’s gone, but I’ll never tell anyone but you. My report will list it as a suicide. His dirty deeds finally caught up with him, so he jumped. Maybe once he hit the water, he changed his mind and tried to swim to shore. He was a smoker and a drinker, and ate his fair share of Big Macs, so his heart gave out. That’s what happened, right, Charles?”

“You’re right,” he says sliding from the booth and slapping a five on the table. “You’re exactly right.” 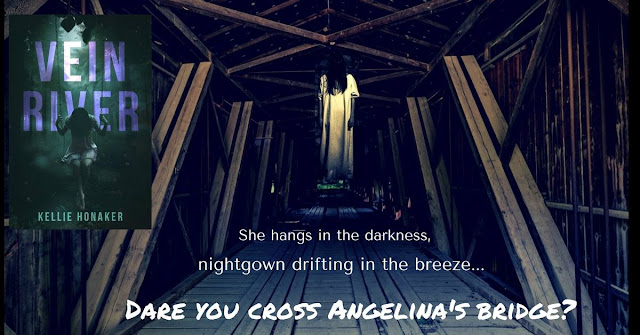 Kellie is the author of Grandfather Hollow and The Web Weaver, two short story collections available through Amazon. When she isn’t rescuing animals or fueling her book addiction, she’s busy mastering the art of becoming a hermit and a writer. Kellie incorporates her pets into her stories at every opportunity. In fact, her author picture features Salem, the kitten who makes his debut in Vein River. Even though the fictional Salem is robust and into mischief; the real Salem is blind. It doesn’t slow him down though. He still manages to climb his cat tree and catch the wayward fly. Once his bug-catching duties are over, he lounges around with a French Bulldog named Dumplin’.