Release Tour for The Jade Emperor by Suzanne Jenkins

THE JADE EMPEROR
by Suzanne Jenkins 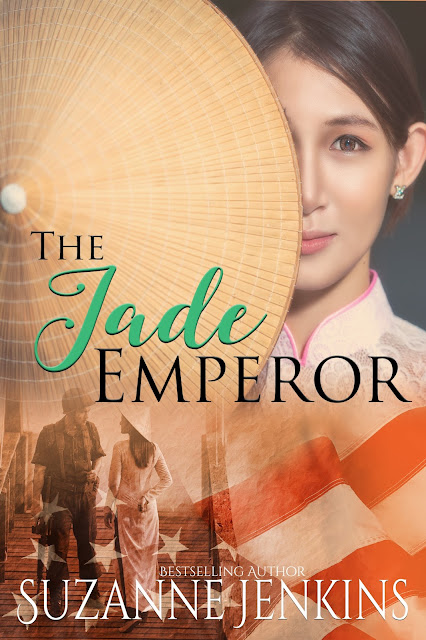 A marriage of nearly half a century faces its greatest challenge when a stranger arrives, bearing life changing news. Although Steve and Kelly Boyd live together, they barely tolerate each other. Marrying in their teens and quickly becoming parents, the separation due to the war in Vietnam forms the foundation for the next forty-five precarious years.

Filling the empty marriage with the companionship of her twin sister, Karen, and the family she made with Steve, Kelly’s life revolves around her six adult children.

The stranger’s sudden appearance clarifies so much about Steve’s lifetime behavior to Kelly.

Heartfelt conversations at the local coffee shop where son Reggie works as a barista, help the family resolve differences, build new relationships, and grow in acceptance of one another.

At the end, love outweighs everything.

Before night fall, Kelly Boyd’s life revolved around her marriage and children. After sundown that same day, many of the things she’d based her life on would no longer exist.

In Michigan, autumn meant apple cider and donuts; pumpkins piled high at every market, the pungent smells of campfires in backyard fire pits, and hay bales stacked decoratively on suburban porches instead of in horse and sheep troughs. Loving fall the best out of all the seasons, Kelly hoped to spend part of the upcoming weekend visiting a local cider mill with her children and grandchildren, initiating the onset of autumn. No one questioned what the weekends would bring; Kelly had something planned for each one far in advance. Looking forward to it all week, the excitement and anticipation made the stress of her job recede. Kelly didn’t need vacations; cruises and trips to exotic places held no interest for her because her family provided all she needed in life.
Simmering away in the back of her subconscious was a seed of non-specific unease that grew and festered if she gave it too much of her attention. A common occurrence for her, she thought it was simply women’s intuition instigating worry with no foundation. Sticking rigorously to her schedule no matter what; her husband, Steve once joked that he could be having a heart attack on the floor, and Kelly would finish whatever task she was doing before she’d stop to call 911.

“That’s not even funny,” she replied the first time he said it, frowning, but he wouldn’t relent.

The routine had become essential for her wellbeing. After a week of grueling hospital work as a nurse, Kelly spent each Friday night cleaning house so the weekend would be free. Dinner long over, she’d talk on the phone to her sister with reruns of Hoarders on the television as background noise while she cleaned. Steve, her husband of over forty years, sequestered in his basement man-cave watching sporting events on a ninety-inch flat screen, was oblivious to whatever Kelly was up to until he heard the vacuum running.

On this particular Friday, the weather was warm; the last days of Indian summer in progress, and in honor of it she’d left the front door open, locking the storm door. While mopping the wood floors that covered the dining room and front hallway, she heard a car pull up in front of the house.

“Hold on for a minute,” she told her sister, holding on to the phone.

Going to the door, she looked out at a Yellow Cab that had stopped directly in front of their house. A tall, thin, man got out of the back, and leaned through the window to chat with the driver. Kelly saw him reach into his pocket to retrieve paper money, watching as he counted out bills, handing them through the window. The driver drove off, and it wasn’t until then that Kelly realized the man was headed to her house.

“Beaver, come,” she called to the dog in a low voice.

Their shepherd - boxer mix obediently came to her side and gave a low growl as he watched the man walk up the steps. Wishing the TV wasn’t on so loud; if she needed to yell for Steve, he’d never hear her. Standing with the mop handle in her hand, the young man came up the steps, smiling. Attractive, clean cut, and possibly Asian, she thought if he’s going to attack me, he’d bust through the door right away, but the dog would get him.

“Hi, I’m sorry to show up at this hour. Is Augustus Boyd here?” he said loud enough to be heard through the glass.

It was uncommon for someone to come to their house late, and never for her husband. Kelly hesitated, wondering if she should at least ask his name, or why he wanted to speak to Steve, but decided against it; she’d let Steve handle it.

“I’ll get him. Wait here just a moment.”

The young man nodded his head, and Kelly, on a whim, shut the big door and locked it, putting her mop handle against the wall, moving quickly to the basement landing. She opened the door and ran down the steps. Steve looked up when she entered his den.

“There’s a man at the door asking for Augustus.”

She shook her head. “I was standing there like an ass with the door wide open cleaning when the cab let him out, and all I thought of was how quickly I could get the door shut without offending him.”

Steve got out of his recliner and followed her up the stairs.

“I have no idea.” Kelly stepped aside so Steve could get to the door.

Opening it, the young man looked at Steve, smiling. They watched each other, looking into each other’s eyes.

“Can I help you?” Steve asked, his heart pounding, the unfamiliar intrusion upsetting.

Not a deep thinker, something told Steve this man would alter the course of his life.

“Can I talk to you in private?” the young man asked, looking around Steve’s shoulder at Kelly.

Steve looked at her, too and shrugged his shoulders. He unlocked the storm door.

“Sure,” he said, stepping out onto the porch, closing the door behind him.

Kelly wondered what could be so important, or so private that the man couldn’t talk about it in front of her. Picking up the phone, she spoke, but her sister had hung up. Calling her back, for the next ten minutes, they speculated about who it might be.

“I’ll call you as soon as I know what’s going on,” she said before hanging up.

Walking to their bedroom, she grabbed the linen hamper, circling through the rooms on that floor to grab what needed washing, taking it to the basement. Nothing, not even a mysterious stranger could disrupt her routine. Moving clothes from the washer to the dryer, she then fed more dirty clothes into the washer. If she timed it right, she‘d have all their laundry done by midnight.

Life had become regimented for Kelly and therefore tolerable; grocery store after work at the beginning of the week, housework on Friday, visiting on Saturday, outings on Sunday. Monday she’d start all over again, cooking for the week, visiting her children when she could in the afternoon, often lingering over their kitchen tables long after she should’ve been home. Getting things done, being organized; that was what mattered to her. Having every area of her life under control was what brought her anxiety-ridden thoughts into submission.

Their six children lived locally. Augie, Jr., twins Ben and Lisa, Ken, Reggie, and Alice. Two were married with children of their own; they lived in houses and apartments spread around town. Proud of her children, she and Steve had worked hard to educate them, and they were all employed in some form.

Running up the stairs with a basket full of folded laundry, she yelped when she opened the door, Steve standing in the kitchen surprising her.

“You scared me. Who was it?” she asked, taking the laundry back to their bedroom.

Not answering, he followed her.

“I’m going to drive him to his hotel so he doesn’t have to wait for a cab,” he said, picking up his wallet and money clip off the dresser.

“Who is he?” she asked again, making his and hers piles on their bed.

He didn’t answer again, and Kelly turned to look at him.

“The son of a friend,” he said. “I’ll be gone about an hour. Do you want anything while I’m out?”

It was so odd, him leaving like that on a Friday night; she was concerned only from the standpoint that he’d be safe and nothing else. She didn’t distrust him, certainly. There was no reason not to trust him.

Taking a moment to really look at him, he was as white as a sheet. “What’s going on?”

He went to her, took her by the shoulders, kissing her forehead, so out of character; she knew something was terribly wrong. Steve hadn’t kissed her in months.

“I’ll get the full story from him on our way into town. I’ll have my cell phone if you decide you need anything.”

She thought, what would I need?

“Hurry back,” she said, concerned.

Trying to think what friend had a son who’d show up on a doorstep at ten at night, no one came to mind. Steve was a pipefitter, and the shop where he worked had almost a zero turnover. When he retired in one more year, it would be the first opening they’d have in almost fifteen years. She knew everyone he worked with, and his friend-pool, although she could hardly say they were friends, was made up of other pipe-fitters. They’d all worked together since they were kids. Could it be a son of someone from work? She picked up the phone, wanting to speculate with her sister. It was almost eleven, but she knew Karen would still be up, running the vacuum.

“He might have been Hispanic or Asian,” Kelly said. “Foreign. Tall. Black hair, high cheek bones, almond eyes. I couldn’t really tell because the light is dim on the porch and it was late. Anyway, like no one I know. Maybe late thirties.”

“Well, you’d better text me the minute he comes back because now I won’t sleep. I’m getting ready to take my shot so you know I’ll be up for a while.”

Kelly laughed heartily. Karen had a shot of vodka nightly, and Kelly’s concern for her sister’s liver was a running dialogue.

“Your husband will drink a six pack tonight. How good can that be for his liver?” Karen said. “Pour another glass of wine. You deserve it.”

“That’s not a bad idea,” she said, going to the fridge. “I’m going to do it right now.” She took the bottle out and poured a healthy glass of wine. “Okay, I’m all set. Thank you for listening.”

“I won’t. It might be late. He said an hour but who knows,” Kelly said.

She’d polish the furniture while drinking the wine.

Suzanne writes page-turning contemporary romance, mystery, and women's fiction with passionately gripping characters that stay with readers long after they turn the last page. The Detroit Detective Stories, beginning with The Greeks of Beaubien Street are a reflection of American fantasy with historical reality. Pam of Babylon books consistently rank in the Top 100 Best Sellers in American Drama with over 500,000 downloads. A retired operating room nurse, Jenkins lives in Southern California.