Welcome to April 28th is Kiss Your Mate Day eBook Giveaway Event. Believe it or not, Kiss Your Mate Day is an actual holiday. So pucker up and give that special someone in your life a big fat kiss of love. To recognize this romantic day, a group of talented romance authors has come together to celebrate hugs and kisses, from romantic love to paranormal love to contemporary love. It's all here, a weekend of free eBooks to last you through the spring.

Don't wait to meet your next favorite author and book. The giveaway will only run from April 27th-30th. So be sure to click on the book cover, which will take you to a page where you can download your FREE eBook. To learn more about an author, simply click on the author's name.

Want a chance to win a Kindle Paperwhite e-Reader? Enter the giveaway at the bottom of the page.

Of Beasts and Bonds: A Paranormal Romance by N.D. Jones - A SEFIA Star Award Winning Book: Seal of Excellence for Independent Authors. Sanura and Assefa are the Fire Witch and Cat of Legend, destined to save the world or die trying.

Heal Me: Club Surrender by A.C. Nixon - Life is sweet and simple, or it was until a certain voluptuous waitress took residence in my fantasies. I'm a man used to getting what I want, and delectable Ryann is about to find herself on the menu.

Salvation: The Italian's Story by Reana Malori - Arturo Sabatino was happy with his life as a bachelor and had no plans to settle down. However, from the day Sydney Clark walked through the front door of his restaurant, he knew his life would never be the same again.

Jezebel Jones by Janice G. Ross - Jezebel Jones has found her soul mate in Aiden Broder. He's taken a stubborn, doubtful young woman and opened her up to the possibility of a flawless love. Simply the Best is the 2nd book in the short story series of a female who's learning to love unconditionally.

He Said, She Said by Danielle Burton - Scandalous things happen in HoneyWell, Alabama. Secrets aren’t kept and friends can quickly turn to enemies. When your business is never your own, day to day life can be a struggle.

Life's Second Chances by Anne Stone - Alejandro Alvarez is carrying a secret that has forever changed his life. Angelina Samuels must overcome her own personal loss. Can they overcome their pasts for a second chance at love?

Caress: The Complete Edition by Josie Litton - Welcome to the Arcadia, Manhattan’s most seductive address where Emma meets the one man who can tempt her to risk everything, even her heart.

Taking Chances by Ann Omasta - This fast-paced, exciting story follows the passionate journey of Abigail Brown, a 28-year-old divorcee who has never had an orgasm, much to her chagrin.

Perilous Passions by Ashlee Price - One phone call turns her world upside down. She begins to wonder if she is in danger from the sexy billionaire she's just started seeing as a real man.

Believing Again: A Tale of Two Christmases by Martin Crosbie - A compelling story of two couples, traveling separate paths, building their lives together, until one day a secret is revealed that changes all of their lives. And, afterward, nothing will ever be the same again.

Unforeseen Love by Kimberly Readnour - Two opposite goals. One Attraction...A challenge that changes everything. With his bachelorhood in question, this Hawaiin playboy must tackle his emotional scars to win the heart of a local sweetheart.

Top Love by Ellen Lane - What will it feel to be swept away by a billionaire?

Henrietta by Patricia M. Jackson - Tom and Etta have a problem. They’ve kissed passionately but don’t remember it. Both are starting life over. Henrietta is an engaging, meticulously written romance steamy enough to raise any reader's heart rate.

Pam of Babylon by Suzanne Jenkins - After Jack has a heart attack on the train, Pam discovers secrets & lies.

Fatal Attraction by Rachel Star - not available at time of posting

Oceans of Obsession by Jennifer Evans - He's a hot Brazilian pro-surfer. She's a free-spirited artist. Will their passion come in with the tide? 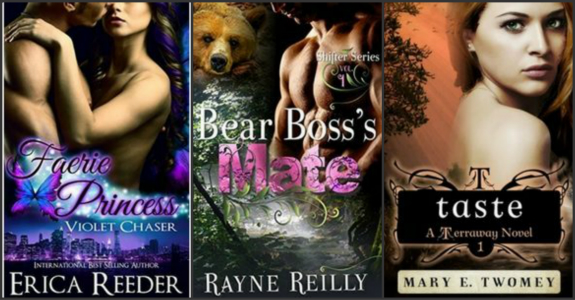 Faerie Princess by Erica Reeder - Not everyone wants to be a faerie princess. Me in particular. Of course, the bad news is I actually am one. Or at least I used to be.

Bear Boss's Mate by Rayne Reilly - Marcy Wright hopes her new job will give her the fresh start that she is looking for. When Austin Morgan's business partner hires a curvy and attractive accountant, he realizes what he's been longing for: his perfect mate.

Taste: A Terraway Novel by Mary E. Twomey - As the death toll rises daily, October finds herself tangled up in a cutthroat world where Filipino fairytale creatures run wild… and every day is a new bloody battle. 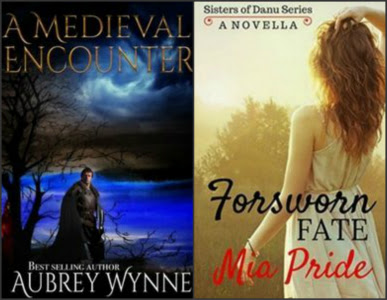 A Medieval Encounter by Aubrey Wynne - A wizard, a curse, a fated love… When Rolf finally discovers the woman who can end his family’s curse, she’s already betrothed. His tale of Merlin, enchantments, and genuine love has Melissa intrigued but questioning his sanity and her heart.

Forsworn Fate by Mia Pride - Garreth's stubbornness has cost him the only woman he has ever loved. Has he gone too far, or can he still convince Ceara that they are meant to be? 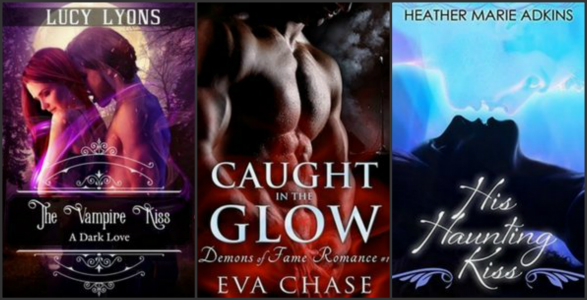 The Vampire Kiss by Lucy Lyons - Viktoria has been an aspiring vampire hunter. This all changes when her new home is raided by vampires and she is taken hostage to become a servant of the vampires.

Caught in the Glow by Eva Chase - When Avery is assigned to protect hot indie rocker Colin Ryder from the demons that prey on L.A.'s stars, the secret he’s keeping puts her heart and his soul on the line.

His Haunting Kiss by Heather Marie Adkins - Boston Kane didn’t believe in ghosts... until she fell in love with one. 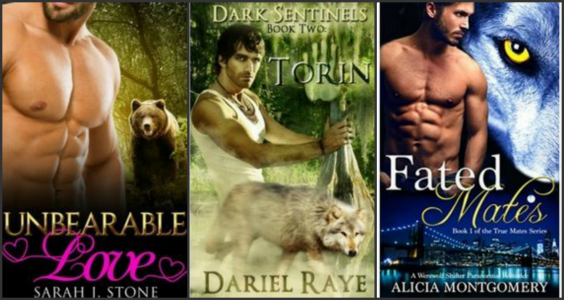 Unbearable Love by Sarah J Stone - Unable to forge a connection with anyone, the bear shifter wanders aimlessly looking for love.

Dark Sentinels Book Two: Torin by Dariel Raye - Akila's life mission is saving animals. When Akila is alerted to a blue-eyed wolf stray, he draws her into a world she never imagined, and passion she can never let go.

Fated Mates by Alicia Montgomery - Private investigator Alynna Chase is drawn in to the world of werewolf shifter clans when she encounters charming and sexy Lycan, Alex Westbrooke. 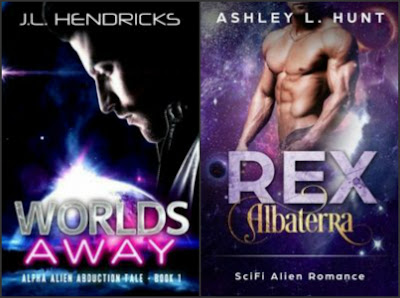 Worlds Away by J.L. Hendricks - Slavery, or mate to an Alien Commander? Which would you choose? Follow Paris and Venay as they figure out what true love is, and how to end the alien abductions of Humans.

Rex Albatera by Ashley L. Hunt - An Alien royalty. The girl next door. Is the universe against them?