Release Tour for For You, I Will by Georgia Lyn Hunter

FOR YOU, I WILL
A Fallen Guardian Novella
by Georgia Lyn Hunter 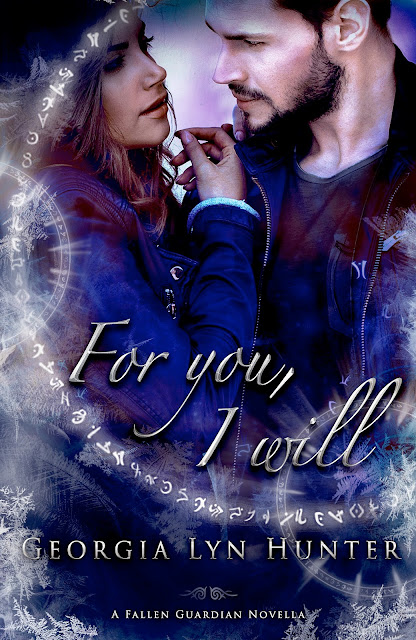 It should have been the happiest time of their lives…

As a Guardian of the realm, Blaéz is aware of the danger that can shadow him, but he’s determined to give his human mate the wedding of her dreams. Flowers, ring, and all, including following a baffling mortal tradition of abstinence—a challenge he gamely takes on.

Then the past and future clash…

Things start to unravel when an old adversary from an accursed life he thought long over suddenly reappears. Blaéz realizes it’s a tie he must sever and finally put an end to a longstanding feud. A straightforward job…until his vindictive nemesis snatches his mate.

It’s a time of reckoning…

Blaéz will risk and do anything to get her back. But first, he must face his own dark and painful past for a future with the one woman who is his very heartbeat.

If he doesn’t, it just might destroy everything he’s fought for…

As they passed the bikers hanging near the motorcycles and puffing up a pungent storm of smoke, Blaéz slowed down, scanning the side street. At the sudden prickles coasting his skin, he changed direction and headed deeper into the alley instead of finding a darkened place to dematerialize back home. Away from the humans, he moved in preternatural speed, skirting the dumpsters and several fallen crates spilled in his path.

“O-kay, so we’re heading for Club Anarchy instead of the castle.” Týr’s droll tone drifted to him. “You need…entertaining?”

“Not at all.” Blaéz halted, the itch bearing down his back intensifying. He searched the dark alley with its looming warehouses. “Something doesn’t feel right, and hasn’t for a while.”

“Well, then, let’s find out what shit’s stirring and clean it out.” A dark grin appeared. “It’s been my kinda week. Blood, gore, and chances of more decapitation? Perfect.”

Blaéz shook his head at Týr’s penchant for bloody violence and surveyed the rooftops of the warehouses. “You sure have a way with words. Hallmark should be grateful they don’t have you on their team.”

“Maybe I’ll compose a sonnet for the wedding.”

Blaéz heard the smirk in his tone. “Like I want to hear your drivel.”

“Don’t knock my verse ‘til you’ve heard it, you uneducated SOB,” he retorted, and cheerfully strolled where even angels feared to tread. “Roses are red, violets are blue—”

“Stop with the interruptions. Don’t care if they’re pink, it’s how the damn rhyme goes. Roses are red, violets are blue, Darci’s so lovely, how in the hell did she end up with a fucker like you—” His amused gaze shifted to Blaéz. “Okay, it needs some fine-tuning, but I should be good to go on the big day.”

“Not if you want to keep your head.” Blaéz slowed down, his attention on the throng of people lumbering out of the club. A flash of light hair caught his gaze and an eerily familiar sensation skated over his psyche. “Shit.”

“What?” Týr asked, scanning the crowd, too.

Without answering, Blaéz took off across the street. Since the demon bouncers knew the Guardians, he sprinted into the club, avoiding the partygoers in the dimly lit corridor, and shoved the metal door open. The pounding rock music reverberating against the walls barely made an impact as he dodged bodies fumbling about in the darkened club, skidding to a halt on the landing. He scanned the interior. Despite the imminent arrival of closing time, the place still swarmed with revelers.

“Fuck, Celt, who the hell are we chasing? At least then I know whom to kill,” Týr growled from his side.

Týr cut him a sharp look. “Your twin?”

His expression grim, Blaéz nodded, probing the upper VIP level with his mind for his kin’s familiar vibe.

“Perhaps you saw someone else who looks like him?”

“Perhaps. He wouldn’t dare show his face in this realm knowing I wouldn’t hesitate to kill him if he came after us again.”

For You, I Will is a companion novella to Breaking Fate. Here's the blurb...

An immortal without a soul is bad enough. But when his only tether to remaining honorable is his addiction to bone-crushing pain, it makes Blaéz a dangerously loose cannon.

A Guardian sworn to protect mortals from supernatural evil, Blaéz straddles the edge of darkness as his needs grow. When a good deed brings him to the doorstep of a female unlike any other, one whose touch ignites emotions long lost in the hellish pits of Tartarus, he’s determined not to lose her. She belongs to him. But she’s human. Forbidden. And bringing her into his life may just destroy them both.

Darci Callahan has given up on love. But when a lethally handsome stranger suddenly appears late one night, she finds herself inexplicably drawn to the captivating man with the pale, empty eyes—a man who awakens in her a desire she never believed possible. Except Blaéz brings more than unexpected passion to her life, he brings danger.

In this treacherous new world of gods and demons, Darci soon discovers a heart-shattering truth and the twisted games the gods play. Caught in the crosshairs, she’s forced to accept that, sometimes, no matter how much you love someone, you have to love them enough to let them go…

I’ve been creating stories from the moment I could string two words together. No matter the tale, it always has romance woven through them. Yes, I'm a hopeless romantic.

When I’m not writing or plotting new books, I like to read, travel, painting, or troll flea markets where I usually buy things I might never actually use because they're so pretty.

After working in a few jobs all art related, a chosen career as a fashion designer, then an art teacher, I finally found my passion four years ago: writing. There really is no other job I’d rather do.

Oh, and I live in the beautiful country of South Africa.