Take a journey into the exotic culture of bayou country in Louisiana's Lafayette and Acadia parishes. Cajun beauty, Angelique Bellefeuille, has had enough of bikers and their bullshit. Being put in danger because of her father's motorcycle club makes that conclusion rock hard solid.

When she's sent to an allied club for protection from a rival club, she's reunited with her childhood friend, Just Batiste. Only he's not the cute, fun, adventurous kid she remembers. He's large, in charge, and menacing.

The last thing Batiste needs is a distraction from the new joint venture with the SSMC, but Fate has her own sense of timing and her own sense of humor as well. Angel is partly his memory of her as a little girl and partly grown woman walking around in the mind-numbing form of a curvy, blue-eyed mischief maker.

Just when he thinks he can't get more frustrated with the little troublemaker, she's kidnapped by the very people he's supposed to be protecting her from. What will he do to get her back? Anything. Distraction or not, he vows she'll be returned unharmed or he'll personally initiate Armageddon. 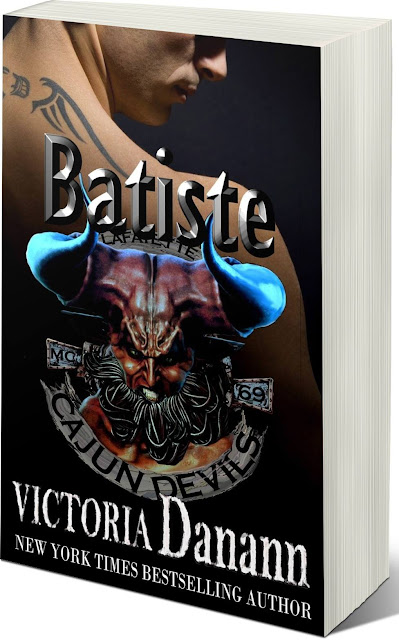 When Angie went back to her room Batiste hadn’t returned from whatever biker intrigue was occupying his time. She took a couple of bottled waters so she wouldn’t have to go hunting in the night.

She supposed she was fortunate to have a room with an adjoining three quarter bath. She took a shower and towel dried her hair, but left it damp because she’d sleep cooler that way. Around eleven she turned off the lights, crawled on top of the cotton sheets and lay still listening to the night sounds of the swamp. After a few minutes a light rain added its voice and she felt herself drifting off to the lullaby of crickets, cicadas, and frogs.

She was dosing when she heard the door open. The first thing her eyes focused on was the bedside clock. It was just after midnight. As she was sitting up to see who it could be entering her room uninvited , she heard… nails on the floor?

“No worry, cher. It’s me. And dogs,” Batiste said in a hushed tone.

“What are you doing?” she asked.

Since she’d been half asleep, her eyes were adjusted to the low light and she could see that he was spreading a sleeping bag on the floor.

“You’re not sleeping on a wood floor.”

She heard the rustle of nylon as he lay down on top of the sleeping bag, but he didn’t answer. There was no more to say about that.

Nothing was more serious than keeping Rou’s girl safe. He had two dogs trained by the SSMC, worth a fortune, and a nine millimeter pistol loaded and within easy reach. That, and the fact that he wasn’t likely to sleep too soundly on the hard floor, meant things were secure to the extent of his control.

At least that’s what he told himself as he robotically stroked Belle’s fur and stared toward the ceiling. The sound of the rain was comforting. Partly because that is one of rain’s gifts and partly because villains rarely get up to mischief in the rain. Maybe, he mused, they’re like that old wicked witch in Oz and don’t like getting wet.