Release Tour for Any Given Snow Day by Marie Harte

ANY GIVEN SNOW DAY
by Marie Harte 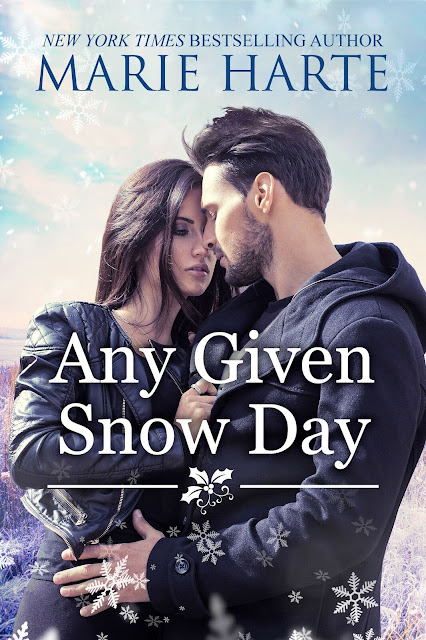 After two Super Bowl rings, MVP status, and retiring from the NFL while still on top, Mitch “Flash” Flashman’s millions should make life at the ripe old age of thirty-five a blessing. Yet he’s restless, rudderless, and can’t tell up from down. Roped into helping his brother coach a bunch of teenagers, Mitch finds himself playing defense against the many women in town wanting his attention. Except for one particular woman who doesn’t seem to like him much. Becca Bragg is mouthy, vulnerable, and sexy, and she captivates Mitch despite himself. But Mitch has no time for a sexy single mom when he’s still trying to figure out who he really is. With the playoffs, a boy’s future, and his own heart on the line, he’ll need to figure out how to pull the ultimate victory—winning Becca’s heart and keeping it. For good.

Mitch stared at a feminine version of Simon Bragg. A few inches shorter than her behemoth son, she had long, dark-brown hair, greenish-brown eyes, and a frown that would do Simon proud.

A subtle glance and he catalogued her feminine assets. Check, check, and check. A stunner if not for the scowl on her face. Her assistant, the other pretty brunette he’d seen with Simon at the game, just grinned at him before hustling away.

Funny, but his heart was racing. Mitch had been with supermodels, actresses, professional athletes. Some had possessed the same qualities Rebecca Bragg did, that essence of attraction that sparked something in his brain…and in other places. But Mitch didn’t do married chicks. Ever. Best to remember that.

He cleared his throat. “I’d like to talk to you about Simon.”

Her frown deepened. “Is he okay? What happened?”

Mitch had debated how to broach the subject. After talking to Deacon, they’d decided Mitch should be the one to talk to her. He still wasn’t sure how they’d come up with that, other than that his brother was a scum-sucking wimp who’d rather face a firing squad than an irate mother.

“As far as I know, Simon is fine. I wanted to talk to you about his attitude though.”

“And before you say this is somehow about me not understanding him because I’m the new guy, you need to know that Simon has been acting out and is pretty much annoying most of the team.”

She studied him in silence.

He wondered what she saw. Did she see the regular guy who’d rather be running down a field or hiding out in his home, reading history books and watching movies? Or did she see the confident, laughing playboy everyone thought him to be?

“Come with me.” She turned and walked into the back of her teahouse.

He followed her toward the sweet smells coming from a small kitchen. Entranced by the scent of vanilla and cinnamon, he took a big sniff. “What are you making?”

“Sticky buns, my version of cinnamon rolls. Hold on.” She took a few steps toward the doorway and shouted, “Nora, can you watch the front? I’m in a meeting.”

Nora laughed and said something he couldn’t make out but apparently Rebecca could.

She flushed and returned, putting the center island between them. He wondered if her husband had a hard time dealing with her moods, then thought the lucky guy probably didn’t much care. A woman who could bake and looked like her? A win-win…until she opened her mouth.

“I’m trying to figure out how to say this without you getting offended. I would have called your husband, but Simon wouldn’t give me his number.”

Something that looked like pain flashed across her face. “My husband is dead. Now what did you want to talk about?”

Wow. Talk about stepping right into it. Might have been nice if the kid had explained his father was no longer alive when Mitch had mentioned the guy. “Sorry. Simon didn’t tell me.”

She sighed. “So what has my son done that brings the ‘Amazing Flash’ to my lowly shop?”

He ignored the heat on his face. “You know, if you’d heard the whole conversation, you might not be so quick to judge.”

“You’re here to talk about Simon?”

Fine. He wouldn’t explain himself to this sexy, stuck-up viper. Wait. Where had sexy come from? Rebecca Bragg was more girl-next-door…with a side of sexy. Damn her full mouth.

Caffeine addict, boy referee, and romance aficionado, New York Times and USA Today bestselling author Marie Harte has over 100 books published with more constantly on the way. She’s a confessed bibliophile and devotee of action movies. Whether hiking in Central Oregon, biking around town, or hanging at the local tea shop, she’s constantly plotting to give everyone a happily ever after. Visit Marie's website and fall in love.