Release Tour for The Burnout Cure by Jill Blake

THE BURNOUT CURE
A Prescription: Romance! Book
by Jill Blake 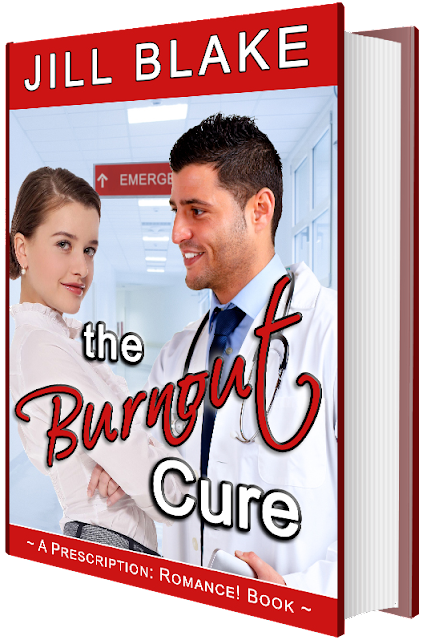 When it comes to burnout, Lily Reid is an expert. Determined to turn her personal tragedy into a cautionary lesson for other physicians, she travels the country, lecturing about life balance and stress management. But her words falls on deaf ears—until she hits on a plan to appeal to a broader audience.

Enter Dr. Wolf Knox, aka “Wolfman MD.” He’s gorgeous, charismatic, and his patients love him. So do millions of fans who follow him online, watching the music video parodies he makes in his spare time. Too bad Wolf believes “burnout” is synonymous with weakness. His motto? Suck it up—and if you can't handle the pressure, get the hell out of medicine.

As Lily and Wolf clash over plans for a joint project, their mutual disdain gives way to desire. But when a fellow physician’s suicide forces them to confront their own fears and prejudices, will their fledgling relationship survive?

(Please note: This is a steamy contemporary romance that contains mature themes and explicit content, meant for adults 18 and over. It is a stand-alone novel, with no cliff-hangers, and a guaranteed HEA.)

Wolf tapped a finger on the pristine white tablecloth. From across the table, another physician glared at him. Obviously not a fan of syncopated rhythm. Wolf sighed, dropped his hand, and feigned interest in what the hospital’s chief of staff was saying.

Another five minutes of the man’s rambling welcome speech, and Wolf was back to tapping, this time against his jean-clad thigh.

He should have just stayed in bed. Or gone for a run. Or ironed out the lyrics he’d been toying with for weeks. Or done any of a dozen other things, instead of wasting his Saturday morning listening to a bunch of self-proclaimed experts pontificate about physician wellness.

What the fuck was that, anyway?

The stupid catch phrase seemed to be popping up everywhere. Kind of like physician burnout. Another term-of-the-moment Wolf hated. You’d think people would tire of the topic. But no. Whenever he opened a medical journal, or stepped into the doctors’ lounge, or went to the ER to admit a patient, there was always someone talking about wellness, burnout, or both.

And now, thanks to his best friend, Wolf had to sit through six more hours of torture. Unless he managed to sneak out early, during one of the breaks. He glanced at the printed itinerary, searching for the two names he’d been assigned. The first was easy enough to find. Lily Reid, the keynote speaker. But the second….He scanned the list to the very end. Yeah, it figured. The last speaker of the day.

He was going to kill Doug for getting him into this.

Of course, it wasn’t Doug’s fault that his wife went into premature labor last night. But the guy could have tried a little harder to find someone else to sub for him. Someone who wasn’t Wolf. Someone who actually chose to serve on Doug’s damn committee. What was the point of being chair if you couldn’t delegate scut work to other committee members, rather than dumping it on your best friend?

“Come on, man,” Doug had said over the phone, after waking Wolf from the first decent sleep he’d had in week. “Free food, six hours of CME credit, and you’ll be out of there by one at the latest.”

“You’ve got to be kidding me,” Wolf groaned. “No amount of free food is worth sitting through six hours of BS.”

Doug sighed. “Just because you’ve got the sensibility of a rhinoceros doesn’t make the issue any less real or important.”

“Give me a break,” Wolf said. In the background, he could hear the familiar sounds of the hospital: a monitor beeping, the low murmur of voices. “It’s one in the morning. You really want to debate this? Now?”

Wolf rubbed his eyes and leaned back against the headboard. “Don’t you have someone else you can tap?”

“Like you said, bro, it’s one in the morning. Everyone else has a spouse or family. You know, a life.”

A sharp cry on the other end of the line cut him off.

And that was how Wolf ended up at the 65th Annual Postgraduate Medical Assembly, waiting to introduce some quack hired by the hospital to explain how to get in touch with your inner child. Or whatever motivational mumbo-jumbo the woman planned to sell as the latest antidote to burnout.

A native of Philadelphia, Jill Blake now lives in southern California with her husband and three children. During the day, she works as a physician in a busy medical practice. At night, she pens steamy romances.