Pre-order Tour for Dragon Lore and Love: Isis and Osiris by N.D. Jones

DRAGON LORE AND LOVE:
Isis and Osiris
by N.D. Jones 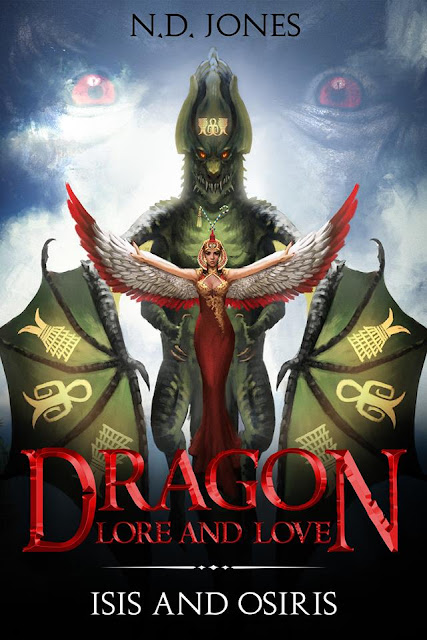 A century ago, the Dragon Kingdom of Nebty was lost to dark-ness. Invaded by demon hordes hellbent on stealing two powerful scepters, the Demon King claimed the preternatural realm as his own. To survive, the dragons fled their beloved home and sought refuge in the human realm.

Having lived most of their lives in human form, Queen Isis and Rock Dragon Osiris, mere children during the Great Exodus, find themselves clinging to their culture and the ties that bind what’s left of Dragonkind. Safe and assured that they are free from the threat of demons, their love flourishes. Yet, on one horrific night, their lives are shattered by tragedy and betrayal. They learn that no realm is beyond the brutal reach of the Demon King.

Scores must be settled.

Love must be remembered.

And a lost nation must be reclaimed.

Life, death, and rebirth, Isis’s and Osiris’s future hinges on all three.

Kneeling by his hip, Isis’s front was perpendicular to Osiris. She laid one hand on his forehead and the other on the arm closest to her. Isis stretched her wings out over the length of his body and permitted the feathers to drape down and around him, a protective curtain of red-and-white.

Shoulder-length braids fell into her face, when Isis lowered her head. Opening her mouth, she blew sun dragon magic onto her mate’s deceased body. Out it came as rings of dragon claws, circling the body before linking together and drifting down to the white binds. The magic seeped through the linen cloth and into Osiris. Isis’s wings grew even more, curving inward until none of Osiris and the jars were outside of the heated border.

The wings flittered as Isis blew more rings of dragon claws onto the prone form. Through exhalations, she prayed for his soul.

Red smoke rose between them, and Isis blew even more magic onto Osiris. The linen burned with sun dragon magic, but not the kind of fire known to humans and this realm. It didn’t char the linen or the flesh underneath. What it did do was burn away the devastating vines of death, scorched the eroding blemishes of decay, and scalded the incapacitating legacy of pain.

Encapsulated in the mysticism and the touch of goddess Wadjet, Isis had no concept of time. All that existed, in the suspended animation between death and resurrection, was fire, hope, and love. A trinity of magical realism that blurred the lines between natural and supernatural.

Linen unraveled under Isis’s otherworldly power and cascaded to the mundane setting that was the grounds of Philae Manor.

The hand on Osiris’s arm balled into a fist, and Isis’s eyes flew to his face when she heard a soft exhale of breath. That couldn’t be right, although she was certain she’d heard something from him.

This wasn’t what she had in mind when she’d envisioned resurrecting her mate. She hadn’t meant it in a literal bodily sense, didn’t think that was even possible. A dragon’s soul existed in their heart. With Osiris’s organs in his body, as well as around him, Isis intended to draw the balance of his soul from his corpse and into the canopic jar with the three-headed dragon lid, while using her magic and wings to, metaphorically, hold Osiris together as a whole unit.

Once sealed within the safety of the canopic jar, she would temporarily transfer his soul to a willing dragon-host, through whom Osiris could speak. His brother Set or another member of the Clan of Ombos would be the best choice, but going that route would increase the probability of Makara finding out. Temporarily resurrecting Osiris’s soul to find his murderer wasn’t the same as bringing Makara’s son back to life. No matter how much they both may have wished it.

Yet, as she gazed at him, eyes closed, skin flawless, and body healed, she couldn’t stop herself from lowering her lips to his.

Tears slipped from eyes she hadn’t realized she’d closed. For a hopeful, insane moment, Isis thought the goddesses had taken pity on her heart and returned her Osiris. They hadn’t. Her magic and prayers hadn’t even drawn the soul out of him. She couldn’t even manage that feat. Helpless, Isis had never felt so—

A gentle hand brushed away her tears. “Why are you crying?”

Isis’s eyes popped open. Dark-brown orbs she loved so much stared back at her. There was recognition, as he took her in, but not the love and intimacy she’d grown accustomed to having reflected at her.

Isis lowered her wings and scooted backward so Osiris could sit up. When he did, the last strips of linen fell away. Her hand twitched to reach for him and pull her mate into a desperate embrace. Instead, she remained silent as the confused Osiris took in his nude form, Isis’s dirt-covered body, and a retreating Nephthys.

“Did I get drunk and go streaking?” He glanced around, eyes moving from the empty grave, his headstone, and then to the piles of dirt. “What in the hell is this? Are you playing a Halloween trick or something, Isis?” Osiris jumped to his feet, heedless of his nudity. He pointed at his headstone. “That shit isn’t funny. I would’ve never thought you would play this kind of sick prank.”

Osiris glared at Isis, which she ignored as she rose to her full height and approached him. Recalling her wings and tail, Isis stalked toward her resurrected mate. When she reached him, he stopped fussing and lowered his eyes to hers.

As she’d done hundreds of times, Isis grabbed Osiris by the nape of his neck, pulled him down to her and kissed him.

DRAGON LORE AND LOVE: Isis and Osiris is part of this boxset releasing Feb 14.

20 Shades of Shifter is a limited edition collection of new and exclusive paranormal romance novels guaranteed to suck you in from page one.

A shape-shifting dragon must win over his reluctant mate and stop Jack the Ripper. A Fae trucker becomes allies with an MC member when trying to deliver magical motorcycles to the Fae Queen. A wolf shifter is held captive in a human research lab where he is tortured until he meets one sexy scientist. An angel risked it all to steal the elixir of life and save his mortal love’s life and over two millennia later must get her to remember she once loved an angel. These stories and many more are included in this steamy, hot collection.

Don’t wait to read this set. It is only out for a short time before it will be gone forever!

N.D. Jones, a USA Today Best Selling author, lives in Maryland with her husband and two children. She is the founder of Kuumba Publishing, an art, audiobook, eBook, and paperback company. Kuumba Publishing is a forum for creativity, with a special commitment to promoting and encouraging creative works of authors and artists of African descent.

A desire to see more novels with positive, sexy, and three-dimensional African American characters as soul mates, friends, and lovers, inspired the author to take on the challenge of penning such romantic reads. She is the author of two paranormal romance series: Winged Warriors and Death and Destiny. N.D. likes to read historical and paranormal romance novels, as well as comics and manga.