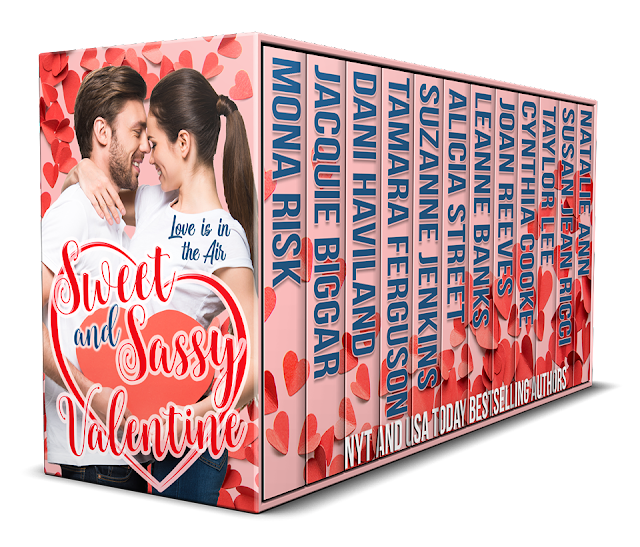 Readers choose to read Romance fiction because it speaks to their need to love and be loved.

Authors choose to write romance because they understand that Love is the greatest force on earth. We write, not fantasy, but the reality that love can be found when one least expects it. Just ask any senior citizen who is in love what it feels like. She or he will tell you that it feels the same way at eighty as it felt at eighteen.

We wanted each of you to have a special Valentine romance to cherish so we created this collection with stories of varying “heat” levels—from sweet romance to downright sexy—so you’re bound to find the kind of romance you love.

We, the twelve authors of SWEET AND SASSY ROMANCE, dedicate this Valentine Collection to you, the Hopeful Romantic!

Keep hoping. You can never tell whom you may meet tomorrow or whom you may already know that you suddenly see in a different way.

If you’ve ever been struck by Cupid’s Arrow, you know Love has the power to change you and your world. Cherish this collection of stories with varying “heat” levels—from sweet romance to downright sexy. You’re bound to find the kind of romance you love. It’s never too late to live Happily Ever After!

VALENTINE BABIES, Mona Risk. What wouldn't the doctor do to save the life of the headstrong reporter and her baby?

WITH THIS HEART, Jacquie Biggar. What happens when two of Tidal Falls' most beloved citizens have second thoughts just before they get married?

THE BIGGEST HEART EVER, Dani Haviland. When would he learn that trying to do everything by himself could be deadly—and make her a widow before they were married?

THAT UNEXPECTED KISS, Tamara Ferguson. Can an undercover FBI Agent rescue the woman he loves when she’s targeted by his father’s killer?

BITTERSWEETS, Suzanne Jenkins. Will waiting for that perfect moment to take their relationship to the next level ever come, or does fate have other ideas?

THE SWEETHEART TEST, Alicia Street. Can the workaholic billionaire who wants the career-driven woman prove he can pass the sweetheart test?

MILLIONAIRE DAD, Leanne Banks. Can the woman and the millionaire who rescued her find forever love after their passionate love affair ended and a baby’s on the way?

SCENTS AND SENSUALITY, Joan Reeves. A science nerd and a man happy with his flavor-of-the-month dating habit try to put a desperate end to his mother’s matchmaking schemes.

HIS MAGIC TOUCH, Cynthia Cooke. Can Sera open her heart to Trent once more and rebuild the family she lost, or will she be fooled by his magic touch and lose everything.

LOVE ME TENDER, Taylor Lee. Tiffany and Brady kick up the heat on their simmering romance proving that TENDER LOVE can be sizzling HOT.

FLYING UPRIGHT, Susan Jean Ricci. After Monique’s skating partner and dearest friend suffers a serious accident, will their relationship regain momentum, or melt due to the past?

ALL FOR LOVE, Natalie Ann. A lost purse. A forbidden love. A bond forged through the test of time.

New York Times and USA Today Bestselling Author, Mona Risk, received an Outstanding Achiever Award from Affaire de Coeur Magazine. She's a two time winner of Best Contemporary Romance of the Year from Readers Favorite; a winner of Best Romance Novel of the Year from Preditors & Editors Readers Poll; and an EPIC Award finalist.
Mona lives in South Florida and has traveled to more than eighty countries on business or vacation. She writes contemporary romances, medical romance, romantic suspense, and paranormal fantasy. Sprinkled with a good dose of humor, her stories are set in the fascinating places she visited or more simply at home.
Goodreads ✯ Twitter ✯ Facebook ✯ Amazon ✯ Website

Jacquie Biggar is a USA Today bestselling author of Romantic Suspense who loves to write about tough, alpha males who know what they want, that is until they're gob-smacked by heroines who are strong, contemporary women willing to show them what they really need is love. She is the author of the popular Wounded Hearts series and has just started a new series in paranormal suspense, Mended Souls.
She has been blessed with a long, happy marriage and enjoys writing romance novels that end with happily-ever-afters.
Jacquie lives in paradise along the west coast of Canada with her family and loves reading, writing, and flower gardening. She swears she can't function without coffee, preferably at the beach with her sweetheart. 🙂
Amazon ✯ FaceBook-author ✯ FaceBook-personal ✯ Twitter ✯ Goodreads ✯ Website

USA Today best-selling author Dani Haviland, a Mayflower and Mormon pioneer descendant, recently semi-retired from selling tractor parts, tools, and roses in Alaska, relocating to a more temperate climate in western Oregon to pursue her passions: writing, gardening, and photography.
Life has changed from jumping into a skidsteer loader to plow snow to pull-starting the walk behind weed whacker, but there are still enough hours in the day for the feisty old lady to propagate people for her novels and plants for her yard. Sharing is part of her personality, so creating books and photos to share all over the world makes her happy.
Her tenacious and perky attitude is reflected in many of her cyber children, whether they be a British lord stuck in 18th century North Carolina or a 6'7" time traveling 'fairy' who is out to champion anyone who is having a rough time dealing with difficult life situations.
Goodreads ✯ Twitter ✯ Facebook✯ Amazon ✯ Website

Writing steamy yet sweet compassionate stories of fate that are wonderfully romantic, Tamara Ferguson is the multi-award winning, #1 international bestselling author of 8 #1 books and novellas in the Tales of the Dragonfly Romance Suspense Series, the Kissed By Fate Series, and the Two Hearts Wounded Warrior Romance Series.
Her wounded warrior romances, Two Hearts Unspoken. Two Hearts Surrendered, and Two Hearts Undone were all winners at the 2016 Readers’ Favorite International Book Awards; with Two Hearts Unspoken earning the Silver Medal in Military Fiction. Two Hearts’ Christmas Wish, the fourth story in the series, just spent 6 consecutive weeks at #1 in the Mistletoe Kisses & Christmas Wishes romance set. Two Hearts Surrendered was just announced as a Romance Selection for the 2016 New Apple Book Awards.
Along with the 2015 Romance Reviews Readers’ Choice Award Winner That Unforgettable Kiss, Two Hearts Surrendered and Two Hearts Unspoken were also finalists for the 2016 IAN Book of The Year. Tales of the Dragonfly In Tandem was a romance finalist in the Indie Excellence Awards, while Tales of the Dragonfly In Flight was a romance suspense winner at the Readers' Favorite International Book Awards.
Since she remains a full-time caregiver for an autistic son (along with a bunch of adopted pets!), you can usually find Tammy working at home, where she spends a lot of time not completing her numerous home improvement projects, because she's writing or helping author friends promote their books on twitter.
Goodreads ✯ Twitter ✯ Facebook ✯ Amazon ✯ Website

Alicia Street is a USA TODAY bestselling author and Daphne Award-winner often writing in collaboration with her husband, Roy, as well as on solo projects. She spent many years as a dancer, choreographer and teacher. A compulsive reader of every genre, she also loves watching old black-and-white movies and inventing new recipes for soups.
Goodreads ✯ Twitter ✯ Facebook ✯ Amazon ✯ Website

Leanne Banks is a national #1 best-selling author of romance novels. She is the winner of the Romantic Times Career Achievement Awards in Series Sensuality and Love and Laughter. She is also the winner of the Florida Writers Beacon Award, the Golden Quill Award, the Georgia Romance Writers' MAGGIE Award and Booksellers' Best Award. Her books have been recognized by the Award of Excellence Contest, the Romance Writers of America Rita Contest, and the National Readers' Choice Awards.
Leanne is a popular speaker to many kinds of groups. One of her workshops was featured on the CBS Morning Show. Drop Leanne an email if you would like to find out more about having Leanne speak to your group.
Leanne believes her readers work hard on the job and for their families, so she tries to lighten the load with stories featuring a strong sense of fun, emotion and sensuality. Reader response is heartwarming. One of her favorite letters was from a woman who had been suffering severe health problems: "[Your books] did more for my health that all the medicine in the world -- as corny as this sounds, [your heroes] made me feel like life is `worth it'."
Leanne lives in Virginia with her family. She loves music, chocolate, quotes, and new adventures.
Goodreads ✯ Twitter ✯ Facebook ✯ Amazon ✯ Website

Joan Reeves is a New York Times and a USA Today bestselling author of Contemporary Romance. Her novels have been published in a half dozen languages, and her ebooks are available at most ebook sellers with audio book and print editions also available. Several of her books are available in French editions through her publisher in France.
When not writing romance—or nonfiction to share what she has learned in life—Joan divides her time between the hustle and bustle of Houston and a house in the Texas Hill Country. At their country house, Joan and her hero, her husband, attempt to grow wine grapes and fruit trees—all while fighting hordes of marauding gophers, skunks, deer, fox, and the occasional copperhead snake.
Joan lives the philosophy that is the premise of all of her romance novels: "It's never too late to live happily ever after."
Youtube ✯ Twitter ✯ Facebook ✯ Amazon ✯ Website

First published in 2003, Cynthia Cooke is a USA Today Bestselling author who has published 18 novels in 12 different countries with Harlequin, Entangled, and Amazon Kindle Worlds. She has a deep affection for romance stories and playing in the ocean. On her best days you can find her on the beach with her notebook, a novel in hand, and her dog, Angel, by her side. Visit her website at cynthiacooke.com
Twitter ✯ Facebook ✯ Amazon ✯ Website

An Award-Winning, From Women’s Pens Author, and Humorist, Susan Jean Ricci is best known for her Cindy’s Crusades Series, starring the hilarious duo Cindy and Jay DeMatteo. These cherished characters are first introduced in the novel Dinosaurs and Cherry Stems, and return to entertain you in the sequel The Sugar Ticket. Their mischief making continues in these shorts Two Miracles for Christmas, A Valentine’s Day to Remember, and The Blind Seer.
Ms. Ricci’s Christmas stories and novellas have been published in the beloved Annie Acorn Christmas Treasuries 2013, 2014, 2015, 2016. Other selections appear in Annie Acorn's Romance 2015 Treasury, Annie Acorn's Romance Treasury 2016, and Annie Acorn’s Spirited Tales 2015. All may be purchased as stand alone stories, as well as other her titles, including those smoking, hot novellas available in Ms. Ricci’s catalogue, The My Sexy Chef Series.
More recently, Ms. Ricci’s When Sailors Play has been included in Uvi Poznansky’s Bestselling Anthology Love in Times of War. Her current tales are offered in the following anthologies Unforgettable Heroes – Unforgettable Passion, and Sweet Heat – Where Love & Suspense Meet.
Susan and her husband Joe live in a beautiful town near the sea, and when time allows, they love to travel. Together they have seven children and ten grandchildren.
Twitter ✯ Facebook ✯ Amazon ✯ Website

Natalie Ann lives in Upstate NY with her husband and teenage son. She has always had a love for books, especially romance and happy ever after. She's written the Road Series and the All Series based in the Capital Region of New York. She is currently writing the Lake Placid Series located in the Adirondacks of New York.
Twitter ✯ Amazon ✯ Website