Release Tour for Earl of Sunderland by Aubrey Wynne 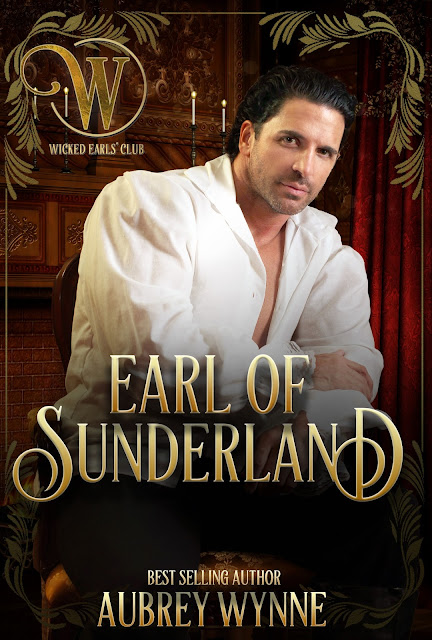 He’s inherited the title of rake. She hides behind her independence... Fate accepts the challenge.

Grace Beaumont has seen what love can do to a woman. Her mother sacrificed her life to produce the coveted son and heir. A devastated father and newborn brother force her to take on the role of Lady Boldon at the age of fifteen. But Grace finds solace in the freedom and power of her new status.

Christopher Roker made a name for himself in the military. The rigor and pragmatism of the army suits him. When a tragic accident heaves Kit into a role he never wanted or expected, his world collides with another type of duty. Returning to England and his newfound responsibilities, the Wicked Earls’ Club becomes a refuge from the glitter and malice of London society but cannot ease his emptiness.

Needing an escape from his late brother’s memory and reputation, Kit volunteers to inspect the family property near Scotland. Lady Grace, a beauty from a neighboring estate, becomes a welcome distraction. When the chance to return to the military becomes a valid possibility, the earl finds himself wavering between his old life and the lure of an exceptional—and unwilling—woman.

Lord Christopher Roker slapped his twin brother, the Earl of Sunderland, on the back. “A fit of the blue devils on your wedding day, eh? Come now, the bride seems a prime article to me.”

“She’s not the woman of my choice. I’m more than an unwilling groom. I’m downright defiant.” Carson tucked his white linen tails into the pale gray pantaloons, gave his matching waistcoat a tug, and adjusted his neckcloth again. “Yet our parents are deliriously happy over the match because she is the daughter of a marquess.”

“You made your own name.” Christopher shook his head and gave his brother’s shoulder a hard squeeze. “Gambling and womanizing has its place when you’re more boy than man. By Christ, we’ve just passed thirty.”

“How did I know I’d fall in love and my reputation would haunt me?” Carson walked over to a polished oak side table and poured two glasses of brandy from the crystal decanter. He handed one to Christopher. “Or that the woman who stole my heart would have a self-righteous father who despises me?”

“How many times did I warn you to pull back on the reins? There are always consequences to one’s actions. You will be the Marquess of Falsbury in your own right someday. It’s time you accepted responsibility.” He took a sip of the amber liquid as Carson downed his in one gulp and poured another. “It’s a bit early for that, isn’t it? You might want to pace yourself.”

Sunderland sank heavily onto a chair, pushing his fingers through a tangle of black waves. “Kit, trade places with me. Marry the chit and take the title. You should have been the heir anyway. You’re better to this type of life than I am.”

“We had this conversation when we were twelve, and you wanted to be a sheik and live in the desert. And then again at sixteen, when you wanted to run away and join the Navy.” He smirked and sat down opposite Carson. “Besides, Mother would know at once.”

“She’d stay quiet for her darling Christopher. You’ve always been her favorite.” He tipped back his head and gulped the second glass of brandy. “A little courage for the ceremony.”

A knot tightened in Kit’s stomach. He had a bad feeling about this wedding but knew better than to admit it. It wasn’t the match itself. Lady Eliza was a beauty and came with a generous dowry. And he didn’t believe for a moment Carson loved another woman. Infatuation was more likely. He fell for one and before he hit the ground, another had taken his fancy. While Kit loved his brother, he also accepted his faults. His abilities did not include accountability or dependability.

“You’re dipping too deep, brother,” Kit said as took the third glass of liquor from his twin, recognizing the slight glaze in those familiar chestnut eyes. “Let’s get you to the church, shall we? At this rate, you’ll be foxed before the end of the wedding breakfast.”

“That’s the plan, sir. Then I won’t feel those leg shackles I’ve acquired.” 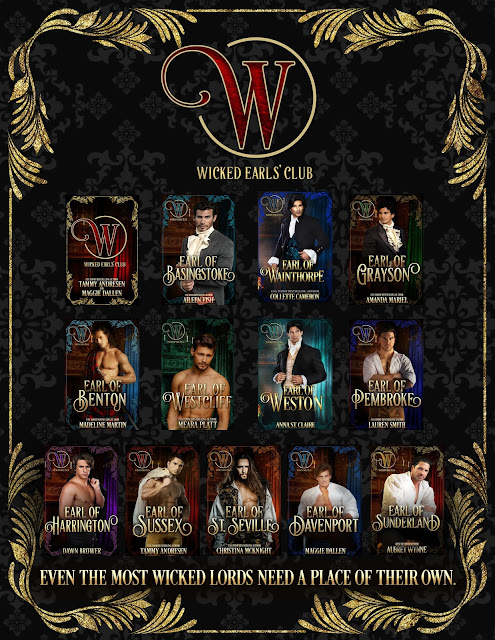 Meet twelve of the most wickedly sinful earls in all of Regency England. Together they make up the Wicked Earls’ Club. A secret group, marked with a single golden W; it is a place where these deliciously devious earls can indulge in their darkest desires. Though fate may have something else planned for them entirely.

Bestselling and award-winning author Aubrey Wynne resides in the Midwest with her husband, dogs, horses, mule and barn cats. She is an elementary teacher by trade, champion of children and animals by conscience, and author by night. Obsessions include history, travel, trail riding and all things Christmas.

Her short stories, Merry Christmas, Henry and Pete's Mighty Purty Privies have won Readers Choice Awards and Dante's Gift received the 2016 Golden Quill and Heart of Excellence award, as well as being a Maggie and Aspen Gold finalist.

Her upcoming series "A Vintage Romance" was inspired by tales of her stepfather, who served in the British Air Force in WWII. Wynne's medieval fantasy series "Medieval Encounters" begins with Rolf's Quest, 2016 NTRWA Great Expectations winner. The Wicked Earls’ Club will continue with a Regency Christmas in 2018.

Subscribe to Aubrey's newsletter for new releases and exclusive excerpts and free stories.

A place of handsome knights, dashing gentlemen, beautiful, sassy women, and romance from the past to the present. You’ll also have some opportunities to help promote Aubrey with her upcoming releases if you feel so inclined. There is fun to be had, prizes to be given, and heroes and heroines to fall in love with. Come join Aubrey's street team.