Release Tour for What He Fears by E.M. Denning

WHAT HE FEARS
Desires Book 4
by E.M. Denning 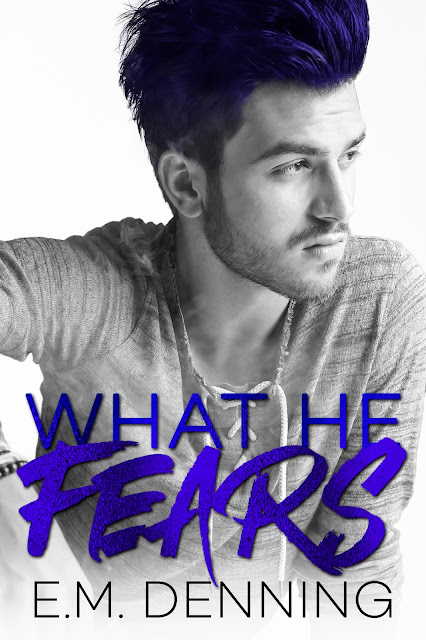 For years Andrew Jefferies warred with himself; if he went so long without realizing he was bisexual, what other things are inside of him that he has yet to discover? When he lands in the arms of Nick Young, the hottest cop he’s ever seen and Andrew is determined not to let his fear hold him back anymore. But Nick is a complicated man and Andrew’s pursuit of happiness will change both their lives in ways he never dreamed possible.

Nick Young would love nothing more than to settle down with Rory, his Dom, but his need to switch has been in the way of that ever happening. When a lost, confused, and very drunk Andrew slams into his life, Nick’s inner Dom wants to help the lost soul and soon a friendship develops into something more. As a switch, Nick has always struggled to reconcile the two halves of himself, just like he struggles to reconcile his two different relationships. But Rory sees a solution through the added complication of Nick’s feelings for Andrew.

Rory Gallagher has loved Nick for years, and for years he's feared losing the man he loves. But solidifying a relationship with a switch wouldn’t be fair because Rory won’t give up top spot for anyone. When Nick confides in him about his feelings Andrew, his heart nearly breaks. He hates seeing Nick so conflicted. Rory would do anything for Nick, including enter into the most complicated relationship of his life.

Andrew shook his head and glee unfurled in Nick so fast it felt like waking up and realizing that it was Christmas morning and Santa had brought him a brand new shiny toy.

Rory laughed and his hand stilled against Andrew’s chest. Nick liked the way they looked together. Andrew, with his guarded emotions and his uncertainty, and Rory with his openness and his magnetism. Nick reached down and palmed his cock. Fuck, the idea of the two of them, or the three of them together was enough to make him insane with lust, but he wanted more than sex, more than two gorgeous fuck buddies.

Once, he’d sat and asked Rory to be his one, his only, and Rory said no. And every moment after that one had been tainted with uncertainty. Then Andrew crashed into him, and Nick noticed him, and he’d have been content to be Andrew’s friend, but knowing he wanted more made him greedy, and now everything he wanted was so close he could touch it, taste it.

“Do you want to, Andrew?” He brought his hand from the back of the couch and put it on his cock. He gripped it through his pants and gave it a long, slow stroke. He watched Andrew watching him, aware that Rory watched them both.

Andrew nodded, and Nick didn’t wait for the words. The words could come later. He’d pull them out of Andrew letter by letter until he understood how this had happened. Nick looked at Rory, who wore a sly expression. Then Rory, with all his fluid grace, climbed onto Andrew’s lap. Nick wanted to pull his camera out and film this moment. He wanted to remember forever the way Rory’s fingers caressed Andrew’s cheekbones and the way Andrew’s eyelashes fluttered against his skin as he closed his eyes, then forced them open again.

Andrew bit his lip, and Rory used his thumb to tug it free gently. Impossibly, Rory leaned closer and Nick wanted to be there with them, sharing the same space, feeling their skin tremble as their lips touched for the first time.

Rory’s lips brushed against Andrew’s in a sweet, chaste way, that was so entirely satisfying in its tenderness. He paused, probably gauging Andrew’s willingness, the same way Nick was from across the room. Then Andrew’s hands slid up the outside of Rory’s legs and Rory leaned in and kissed him for real.

He wrapped his fingers around the back of Andrew’s neck and Nick watched Andrew’s lips part. A flash of tongue, then another. Then Rory pulled away. He smiled sweetly at Andrew as he ran his index finger down the slope of Andrew’s nose. “I’d like to do that again.” Rory slid off Andrew’s lap and nestled in next to him. He held onto Andrew’s bicep and pulled his feet up onto the couch next to him and leaned against him. “But first I think we have some explaining to do.” Rory glanced at the spot next to Andrew. “Sit, Nicky. I’ll explain for Andrew, he’s done a lot of talking today.”

A Disillusioned Dom
A Devastated Sub

Everett Butcher is a successful vlogger with a secret. By day, he’s The Crock Cock, the internet’s hottest, gayest, and most naked chef. By night, he’s ConcealedandCuffed, a secret submissive who bends to the random whims that hit his inbox. To protect his identity and his career, Everett is careful to never show his face and to never play with the same guy twice. But Everett is tired of online submission. It only reminds him he has no one. When Puck1730 messages him, his world flips upside down.

Xavier Jeffries knows he’s playing a dangerous game, but when he discovered his big brother’s best friend’s secret submissive blog, his inner Dom reared his head and he knew he had to have him. He’s been in love with Everett for years and he feels like it’s now or never. But will Everett forgive him for the dubious way he initiated a relationship?

As the big, in person, reveal looms on the horizon, both men are on edge. Will their online playtime translate into real life chemistry and will Everett forgive Xavier when he discovers it was him the whole time?