Complications mount when Sam Turan agrees to work part-time for Heidelberg Bank and dedicate the rest of his time to rebuilding his homeland in the Middle East. Conspiracies and plots threaten his relationship with the Adler heiress and attempts to blow him up escalates the danger level. Sam can only trust a handful of friends. With the ground shifting beneath him, is anyone what they claim to be?

Speaking in a casual tone Sami said. “Face me as if we were just chatting.” Amanj moved and watched his friend’s face, studying every nuance that flickered across it. “What did you see?” “A flash of light in the higher foothills. Yesterday that meant binoculars. I wanted to see if it is repeated.”

He paused as he scanned the hills, looking over his friend’s shoulder. “Yes, there it is again. We need to join the others. We’re being watched. I’ll keep talking to you in that direction.”

“Sami, it could be something else. No point in being subtle.” He stopped and scanned the skies, then finally pointed. “There.” A small dark speck was silhouetted against the sky, coming toward them from the far end of the town. He began running toward the older men.

Sami sprinted right beside his friend, trying to watch his footing on the uneven ground and the sky at the same time. The drone’s buzzing was getting louder. The older men broke into a run, too, each heading in a slightly different direction.

As the two got to a cypress tree on the outskirts of the town, Amanj ducked into its shadows. Instantly he slipped the large rifle from his shoulder and pointed it at the swiftly enlarging black dot in the air. Now the buzzing was like standing next to a hornet’s nest. They watched as the drone dropped in altitude a little and changed course.

“You have the range?”

“I will in less than a minute. It won’t be able to see clearly what I’m doing from the shadow of the tree and neither will our watcher. Come on. Just a little bit closer you evil wasp!”

The drone was over where the three men had been and was still flying. Amanj let out his breath and gently squeezed the trigger. Less than a heartbeat later the drone exploded. Light flashed and a fiery blossom exploded in the sky. A puff of smoke and black bits rained down.

“That devil was armed. Otherwise it wouldn’t have exploded like that.”

“Shit. The fun just continues.” Sami looked over at his friend, a little rattled but trying to be calm. “Im-press-ive! 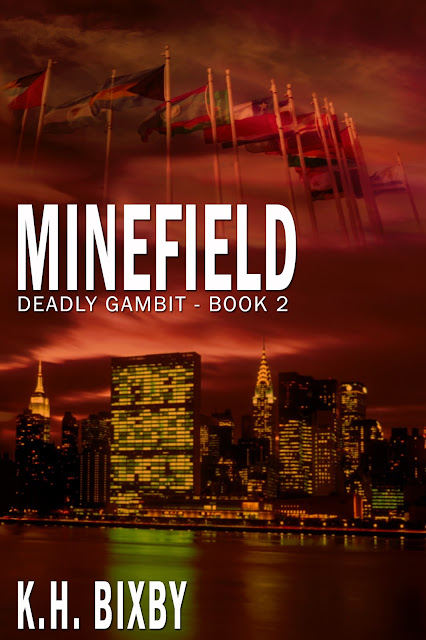 Uprooted from the violence of his homeland, Sami Turan leads a sheltered existence in New York until an explosive encounter with a family member brings back to the surface all he’d lost. On a mission to right a wrong in the best way he can think of, he discovers monsters wear many masks.

Trying to correct his ill-conceived actions, he inadvertently nudges out of balance the first domino of an overlooked international conflict.

Will his actions help his homeland or will he end up starting the next world war? At what price? And will the monsters he exposes in the process be obliterated?

As a person who views news and politics with the fascination of watching a train-wreck, Bixby is driven to extract what IS discussed and twist it into the light of what ISN’T.

Writing fiction, but keeping it within parameters of the believable and possible, K.H.’s thrillers grab the reader, causing them to wonder … is the story real?