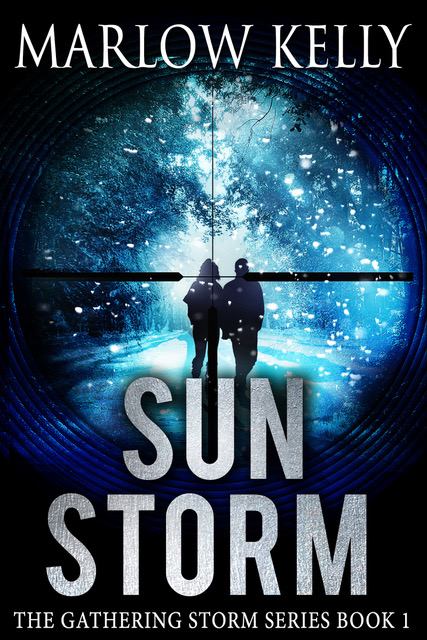 Dr. Marie Wilson is a scientist on the verge of a breakthrough. She has come to Montana on the eve of a blizzard to prove her small, portable solar panel can generate electricity even in the harshest environment. But when four men invade her remote cabin with plans to kill her, she knows she’s in trouble.

Ex-Special Forces soldier, David Quinn, has had enough of danger and death. All he wants is to be left alone on his Montana acreage to pursue his dream of being a beekeeper. But when his old mentor convinces him to help retrieve a stolen solar panel, he thinks it will be a simple job. But the moment he sets eyes on Marie, he knows their assignment is all kinds of wrong.

Together, they escape. Chased by a businessman with unlimited resources, a gunman and a corrupt police force, they are thrust into the frozen Montana landscape. Can a cynical soldier and a naive scientist learn about love and trust in order to survive?

A crack of splintering wood and the door crashed open. Marie jumped to her feet, her heart pounding. A scream lodged in her throat as four men burst in, filling the tiny space. She raced to the fireplace and grabbed the poker.

A handsome blond-haired man led the way. He was so good looking he could be an actor. He had a square jaw and wore a well-tailored leather jacket. Even his fair hair was perfectly trimmed. Two burly men followed, both with dark, short-cropped hair. They could be twins. Their thick bodies and the way they swung their arms reminded her of a pair of gorillas. They also had the same flattened nose and malicious, small, dark eyes. They moved to the back of the room near the sink. The last man had unkempt, long, sandy-colored hair. He wore a crumpled, hooded camouflage jacket and baggy gray pants. A long scar ran across one side of his face, starting at his ear and running through his beard, parting it with a jagged white line. He didn’t say a word. He simply nodded at the poker in her hand and shook his head, silently telling her to drop her weapon.

Sensing that any attempt to fight him would be futile, she let it fall to the ground. “You can take the money. I don’t have—”

“Shut up,” the handsome blond barked. A vein on his forehead bulged as he scowled.

Her heart hammered against her ribs. She prayed they would take what they wanted and leave.

Handsome stepped in front of her and placed the barrel of his handgun between her eyes. “Tell us where it is.”

“What are you doing?” The man with the scar strolled over and stood next to her. In her peripheral vision, she could make out his intense, pale, lifeless eyes.

He leaned close to her face so his warm breath touched her cheek. “This is all wrong.”

A small squeal emanated from her throat. He was too close. Too scary. Killer. The word rang through her mind. The scar, those dead eyes, and his demeanor gave the impression of a lethal, terrifying man.

“What do you mean? Our intel is good.” The vein on Handsome’s forehead throbbed to life.

With one finger, Killer nudged the pistol away from her head. “First, how can she tell us where it is when she’s too frightened to talk?”

Marie released a huge breath. She needed to do something, but couldn’t focus, couldn’t form a coherent thought.

“Second,” Killer continued, “what do we really know about this situation?”

Handsome sneered. “You were in the army. You know how it is. We don’t make the decisions. We follow orders.”

“And what exactly are our orders?” Killer asked, his voice low and calm.

“We’re to retrieve what was stolen and eliminate the girl.”

There had to be a misunderstanding. She was a scientist, not someone who needed to be eliminated.

After being thrown out of England for refusing to drink tea, Marlow Kelly made her way to Canada where she found love, a home and a pug named Max. She also discovered her love of storytelling. Encouraged by her husband, children and let’s not forget Max, she started putting her ideas to paper. Her need to write about strong women in crisis drives her stories.

She is an award-winning author, and a member of the Romance Writers of America.