Western in traditional literary terms is a genre of various arts which tell stories set primarily in the later half of the 19th century in the American Old West, often centering on the life of a nomadic cowboy or gunfighter armed with a revolver and a rifle who rides a horse. Cowboys and gunslingers typically wear Stetson hats, bandannas, spurs, cowboy boots and buckskins. Other characters include Native Americans, bandits, lawmen, bounty hunters, outlaws, soldiers (especially mounted cavalry), settlers and townsfolk.

Please enjoy these books that focus on Western and all its sub-genres. The list is available in alphabetically order by title.

Annabelle was tricked into having relations with a man she thought she was to marry, now she is a soiled dove with no chance of a decent future.

Chase is a Ranger who is besotted with the young girl the first time he sets eyes on her.

Can Chase overcome Annabelle’s indiscretions to give the young woman the future she desires?

Each book in the series will be a stand-alone novella with a happily ever after ending.

When Matt Carter helps to rescue a young girl who has been ferociously beaten and left to die, he doesn't expect she will capture his heart.

Maddie Chandler has no idea why someone would want to kill her and she is terrified they will return and finish the job. And, why can't she remember who she is or where she is from?

Can Matt protect her from the vicious outlaws who are determined to take something from her?

Will local Law Enforcement, Texas Rangers and Indian Trackers find the vicious outlaws before someone is killed?

A story about tender love, murder, greed and intrigue.

Hyacinth Woodley is a desperate woman. Officially deemed a spinster with no marriage prospects in sight, alone after the death of her parents and out of money, she answers an ad for a mail order bride, only to be rejected by her groom upon her arrival in Creek Bend. She has a choice to make—work in the saloon or accept an outrageous offer of being one man’s unpaid mistress.

Offer O’Neal is the new, less-than-proud owner of the Double O Ranch. After sinking every cent he had into the property, he’s left pinning his dreams of success on stud fees from his horse, the only thing of real value he’s got. He can’t afford a wife, but a willing woman in his bed is an appealing prospect, and Hyacinth’s got nowhere else to go.

Just as Offer starts thinking of Hyacinth as the one bright spot in his otherwise stressful and unlucky life, the bridegroom who rejected her returns demanding repayment for his investment. Ernest Horsham feels he’s spent a lot of money on getting the woman to Creek Bend under false pretenses, and the judge is on his side. But it’s only when Hyacinth is arrested as a thief and a fraud that Offer realizes how much he values her company.

Davy Hill goes from obscurity to fame by riding the rankest bull alive. Coming from a life of poverty, the young cowboy expects his life to change for the better now that he’s a successful professional bull-rider. Yet, with every occurrence of good luck comes an equal dose of bad. He suffers a potentially career-ending injury, a string of betrayals, and much worse. Despite all the brutal slams he takes, he keeps getting up, because he’s a bull-rider and they never give up.

Two Indians and a Dead Man by C. Forrest Lundin

"Someone behind him pulls the hammer back on a rifle. Now James understands why his horse didn’t want to move.

Emmalee McCracken is a pawn in a bigger struggle than anyone anticipated. But getting out alive and staying out of jail will take all James Madison Robertson’s intellect. And keeping Emmalee in Oregon may prove to be beyond him.

Based on a real situation that happened in 1880, two towns in Union County, Oregon engaged in a vicious battle to get the railroad to come their way. The conflict resulted in harsh feelings that persisted into the 20th century." 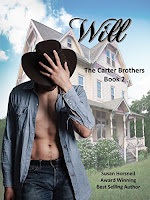 Will by Susan Horsnell

Will Carter, a deputy in Gold Springs, has no intention of settling down and the furthest thing from his mind is marriage.

He insists his brothers would have to hogtie him to get him down the aisle.

Their first meeting results in a bruised jaw, a sore backside and a stay in jail.

Will's attitude regarding women is proven right by the feisty hellcat.

So, why does she get under his skin?

Will she be able to save his life?