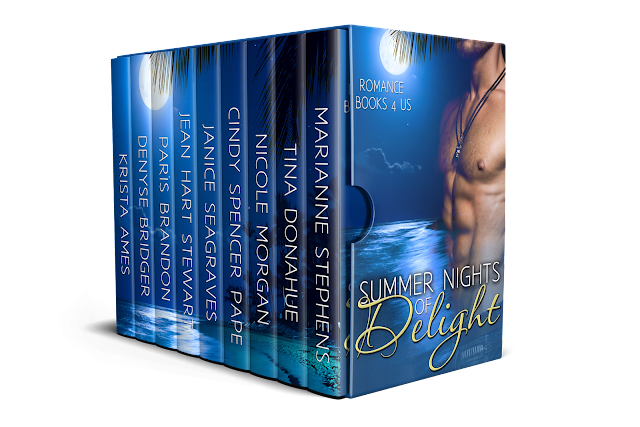 With the summer months slipping by, the temperature will still stay hot when you read this heart stopping collection of passion and seduction. Brought to you by the authors of Romance Books 4 Us, and written by today’s hottest bestselling authors, there is a little bit of something for everyone in each story. So run, don’t walk, to your nearest online eBook retailer and one-click this compilation of sexy reads which will pull you into… summer nights of delight.

I'll Dance With You by Marianne Stephens

Make Me Breathless by Tina Donahue
These rugged cowboys know what they want…the biker chick who just became their neighbor.

When Ally inherits a Texas ranch, she’s not about to trade in her Harley for a horse or a cow. However, she is taken with the McCrays, two deliciously virile cousins who own the adjoining land. Lucas and Colt’s lean, hard bodies are a major delight as she watches them work their property then strip to skin to cool off in the creek. Maybe it’s time to meet her neighbors.

Colt’s never known a woman quite like Ally, sultry yet vulnerable and totally clueless when it comes to ranching. Hell, what kind of man would he be if he didn’t offer to help? Lucas feels the same. Both men want to give her some fun, Texas style. Long, hard, and thorough.

Ally’s certainly game for a good time, yet the sweetest surprise is what follows.

Surrender Her Inhibitions by Nicole Morgan
Three years ago Sophia Hunt was on the tail end of a bad break up and in a vulnerable and confused state of mind when she crossed paths with the sexy and seductive J.T. Mastrantonio.
Stuck in a rut and no longer satisfied with his successful life, J.T. finds an unfamiliar ache when the scared girl who ran out on him years earlier walks back into his life.
Though time is not on their side, Sophia is faced with the realization that her biggest fears and greatest temptations are one in the same. And J.T. is the only man who has what it takes to get Sophia to surrender to her inhibitions.

Unawakened by Cindy Spencer Pape
Three years after his wife’s death, Quinn Carling has finally come to peace with himself and the detective returns to New Orleans to visit her grave and say goodbye. Darcy Jefferson is a street performer who can see auras and refuses to let her abusive past bring her down. When this unlikely pair meets, the sparks begin to fly. When they witness a murder together, Quinn resolves to protect Darcy. With help—and interference—from Quinn’s former in-laws, the local police who want Quinn back, a mutt named Olaf and a powerful voodoo priestess, the two of them help search for the murderer, so he doesn’t find them first.

Quinn never expected to fall in love again, but he hadn’t counted on the magic of New Orleans.

Kidnapped and seduced, Crystal Wedgewood will do anything to get back to her husband. Even fight a king dragon with her bare hands.

Marcus, Lance and Charles, once three warriors and now forever friends. When Marcus marries the girl of both their dreams, Lance feels bereft, as happiness seems impossible. But when he sees a girl in dire need of rescuing the gentleman in him responds, even though reluctantly.

Shannon has always loved Lance. When her wicked brother-in-law takes her captive, planning to kill her once she achieves her majority and he can claim her fortune, she prays Lance will find and rescue her. His loving her is beyond her imagination, but she will go through hell to be with him. Can they both survive the torture they find they must endure to be together?

Head Over Heels by Paris Brandon

A sexy CEO finds an unexpected treasure when a quirky thrift-shop owner falls off a ladder, and into his arms. Lust at first sight has never been so much fun!

A sexy P.I. between jobs decides to take what should be an easy assignment. Little does he know his life is about to get complicated in a multitude of ways when he becomes involved with the woman he was sent to find–and reawakens a past nightmare neither of them is prepared for…

Nick Red Cloud is between jobs when he’s offered a milk-run job for a nice chunk of cash. Since he’s at a loose end, he takes the job, a simple locate and report back assignment that takes him to a small town in Montana. He certainly never expects to meet a woman who will challenge him, ignite a passion he’s never experienced before – and then reject him when he unintentionally disrupts her entire life and brings her face to face with a nightmare past she’s fought years to forget. When the truth becomes clear, Nick becomes a man on a mission, and he won’t stop until he’s avenged his mistake and made it right with the rebellious woman who’s stolen his heart…

*Warning: This story contains a graphic flashback rape scene that some readers may find uncomfortable to read.

Surfs Up by Krista Ames

Benji Reed was an accountant by day but a surfer on vacation. Neither of those two things had anything to do with women and that was exactly the way he liked it. He was a focused career-minded man who didn’t have time for dating. That is until he met a hottie in the local bar who caught his eye.

Kylee Scott was running from a failed relationship and her ex. Luckily she'd been granted permission to inhabit her Grams cottage and unlimited access to as much sun and solitude as a woman needed. Except for two distractions which happened to both be men. There was one on a silver surf board that didn’t know how to surf and another in a bar. Her biggest problem... they both captured her heart. 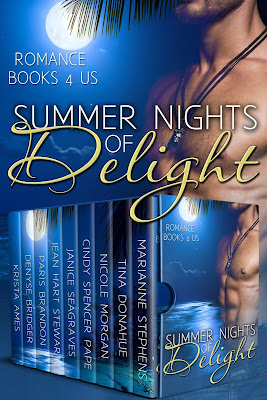 Nicole Morgan is a USA Today and International best-selling author who has written romance in various genres of romance. She is a proud member of Writerspace, a Romance Books ‘4’ Us Gold Author, as well as being a Sweet and Sexy Diva. Additionally, you will find Nicole writing under the names of Taylor Brooks and Nicki Day.

When she isn't busy writing, Nicole also mentors authors, offers administrative services and is the founder of Romance Collections. Find out more about Nicole and her books by visiting her website, or any of her social networks.
Instagram ✯ Twitter ✯ Facebook ✯ Amazon ✯ Website ✯ Blog ✯ Pinterest ✯ Tumblr ✯ Services by Nic

Cindy Spencer Pape firmly believes in happily-ever-after and brings that to her writing. Multiple award-winning author of the best-selling Gaslight Chronicles, she has released almost sixty novels and stories, which blend fantasy, adventure, science fiction, suspense, history and romance. She lives in southeast Michigan and when not hard at work writing she can be found restoring her 1870 house, dressing up for steampunk parties and Renaissance fairs, or with her nose buried in a book.
Twitter ✯ Facebook ✯ Website

Janice Seagraves grew up with a deep love of science fiction and adventure stories. Always the consummate artist, she traded in her paint brush for a desktop to write breathless life-affirming novels that celebrate enduring love.
Facebook ✯ Website ✯ Twitter

Jean Hart Stewart Love California, even though I’m a transplant. Love writing and all it entails, crazy characters demanding to be let loose on the page, long hours of research, every bit of it. I raised two children and spent about twenty years in real estate before I summoned the courage to quit and do what I always wanted to do, WRITE! While he was alive my husband was my first-stop editor and biggest fan. Now that my children are accustomed to my writing sexy novels they’re equally supportive.

I’m currently finishing my 21st book, tentatively named Double Love and have four books coming out this year. I think I’m blessed as well as lucky. Do write me with any questions. I love to hear from readers!
Blog ✯ Website

A member of Romance Writers of America, and published since 2009, Paris Brandon writes contemporary, paranormal, erotic and historical romance, throwing in a little mystery and suspense for good measure. When not dreaming up stories featuring heroes who aren’t intimidated by strong heroines, she loves rummaging around antique stores for vintage clothes and jewelry. She lives in the mid-west with her husband of many years, and is currently enjoying all of the period dramas on Netflix, and wondering where she can find a hat that makes her look as stylish as Miss Phryne Fisher.
Pinterest ✯ Twitter ✯ Facebook ✯ Amazon ✯ Website

As an award-winning, best-selling author, Denysé Bridger writes about a multitude of things, always with a touch of romance, passion, and fantasy. Her heroes tend to be alpha men who are willing to do whatever it takes to win the heroine’s heart and trust, while her heroines are strong, emotionally courageous women who put their hearts on the line for the men they love. Passionate, honorable characters drive Denysé’s stories, in whatever genre you find them in.
Mobile Friendly website ✯ Twitter ✯ Facebook ✯ Blog ✯ Website

Krista Ames was born and raised in Indiana. She now resides in Northern Michigan with the love of her life and their 4 children.