Release Tour for Beyond the Mist by Casi McLean

BEYOND THE MIST
Lake Lanier Mysteries, book 2
by Casi McLean 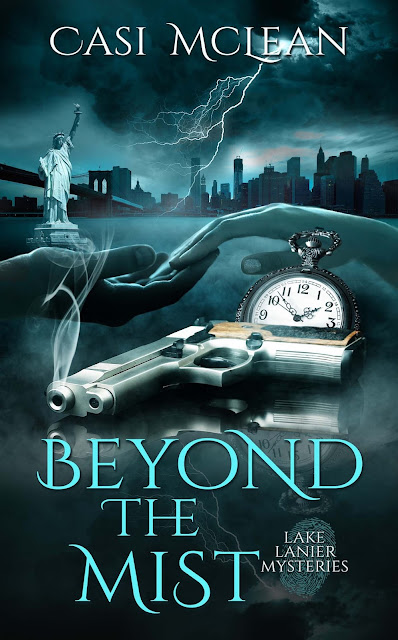 Piper Taylor concedes she’ll never fall in love, until a treacherous storm spirals her into the arms of the handsome Nick Cramer. Unrelenting remorse over a past relationship haunts Nick, but he can’t deny the mysterious connection and hot desire Piper evokes.

The allure of a secret portal hidden beneath Atlanta’s Lake Lanier tempts him into seizing the opportunity to change his mistakes. But his time slip triggers consequences beyond his wildest dreams.

Can Piper avoid the international espionage and terrorism of 2001 New York, find Nick, and bring him home before he alters the fabric of time, or will the lovers drift forever Beyond The Mist?

A soft mist hovered over the moonlit lake, beckoning, luring him forward with the seductive enticement of a mermaid’s song. Rhythmic clatter of a distant train moaned in harmony with a symphony of cricket chirps and croaking frogs. Spellbound, Nick Cramer took a long breath and waded deeper into the murky cove. Dank air, laden with a scent of soggy earth and pine, crawled across his bare arms. The hairs on the back of his neck bristled, shooting a prickle down his spine that slithered into an icy pool coiled in the pit of his stomach. He clenched his fingers into a tight fist, determined to fight through the emotion consuming him. Fear sliced through his belly like icy shards until he finally heaved, forcing rancid bile to choke into his throat.

A sudden surge swirled around him, yanking him into a whirling vortex, where a violent blue streak dragged him deeper, deeper beneath the lake into the shadowy depths. Heart pounding, he battled against the force, twisting, thrusting toward the surface with all of his strength but, despite his muscular build, he spun like a feather in wind into oblivion. When the mist dissolved, Nick Cramer had vanished.

Darkness consumed him, a cyclone spinning, twisting Nick as he ripped through an endless void. His lungs burned for oxygen. He could hold his breath no longer, and relinquished his resolve, but he felt no pain. Instead, a sense of serenity encircled him as if he were floating, weightless, breathless, helpless on a cloud of warm air...then the abyss abruptly imploded. Pierced by a brilliant violet-blue light that shattered into a kaleidoscope of color, the tempest hurtled him, whirling, snaking boundlessly until he finally burst through the surface, gasping for air.

He filled his lungs to capacity, breathed in and out several times before opening his eyes to assimilate the greenish blur surrounding him. Instinctively dog-paddling to stay afloat, he stared at a rustic old wooden bench situated atop a ridge above until his head stopped swimming. He had survived the tumult that ripped his body through Lord knows what and challenged him physically and emotionally to the limits few men could endure. And for what, to end up exactly where he started?

“Noooooo.” His blood-curdling moan cut through the silence.

He slapped his hand across the water, scooping a splash that flew around him. There was nothing more he could do. He tried. He risked his life to set things right, to offset the tragic event that had haunted him for eleven years, but he always knew the chance equated to that of a snowball in hell.

Reeling from her boyfriend’s indiscretions at a party, Lacey Montgomery escapes into the throes of a torrential storm. Her car spins out of control and hurtles into the depths of an icy, black lake. She awakens in the arms of a handsome stranger, in a place she’s never heard of—thirty-four years before she was born.

Bobby Reynolds is smitten the moment the storm-ravaged woman opens her eyes. Learning the truth about her origin does nothing to stop the passion taking root in his heart and leaves him torn between finding a way to return Lacey to her time and convincing her stay with him.

Will the couple be able to discover the key to a mysterious portal before time rips them apart? Or will their spirits wander forever through a ghost town buried beneath the lake?

Casi's powerful memoir, Wingless Butterfly: Healing The Broken Child Within, shares an inspirational message of courage, tenacity, and hope, and displays her unique ability to excel in nonfiction and self-help as well as fiction. Known for enchanting stories with magical description, McLean entices readers in nonfiction as well with fascinating hooks to hold them captive in storylines they can't put down.

Her romance entwines strong, believable heroines with delicious hot heroes to tempt the deepest desires then fans the flames, sweeping readers into their innermost romantic fantasies. Ms. McLean weaves exceptional romantic mystery with suspenseful settings and lovable characters you'll devour. You'll see, hear, and feel the magical eeriness of one fateful night. You'll swear her time travel could happen, be mystified by her other worldly images, and feel heat of romantic suspense, but most of all you'll want more.