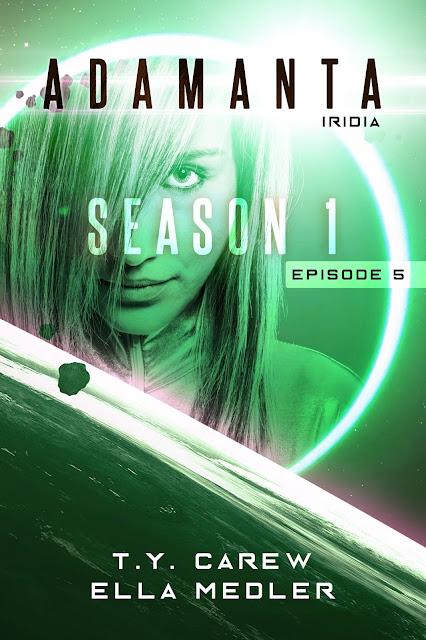 A team of humans is willing to face almost insurmountable odds to save the human race from annihilation.

The search for Adamanta sends Xander's team to a planet locked in ice. But what else lurks under the surface?

With the Beltine starting to realize the humans are using their precious metal in similar ways, they know they have to up their game. But how far will they go?

Join the Adamanta team as they save some human refugees from a life of slavery and control.

"There is metal in the rock you took from the human?" The Anassos blinked slowly, waiting for the Kyraos who'd just returned from the surface of Iridia to elucidate.

"Yes, Your Highness," he answered as he bowed. "But there is more density of the metal within the human."

"How so?" The Anassos turned her head and focused all her eyes on the shivering human girl who had been pushed to her knees by the Dairos holding the chain to her bound hands. "How did you acquire the polydinite in your body, human girl?" the queen asked, turning her fierce glare to her. "Answer me!"

The girl shivered more violently, shook her head feebly, and suddenly shrieked in agony. Her body convulsed a few times, then went limp at the feet of her guard, barely stirring. The queen huffed with impatience and turned to the Kyraos who had been giving his report.

"We cannot tell without more research."

"Your Highness," said another Kyraos with the crest of research staff on his uniform, "it is impossible to tell where the polydinite is stored within the human's body. It seems to come from everywhere. It could be in her blood, or flesh, or bones—"

"Then cut her to pieces and find out!" screeched the Anassos. She swept around to her throne and settled down, dismissing them with one quick flick of her three-fingered hand.

Around her, heads bowed and silence echoed. The trembling of the human heap on the floor, now back to her knees, intensified. How the Anassos despised fear! Fear did nothing but lock up your senses. Fear would not save the girl. Nothing could save her.

She brought her spindly fingers to her chin, deep in thought.

Unless the girl could be made into a weapon.

From Book 1: A team of humans is willing to face almost insurmountable odds to save the human race from annihilation. But quite how safe from discovery and attack is the planet the research team has been secluded on?

This episode was written by Ella Medler.

Ella Medler is a U.K. author and editor. She writes fiction in many genres in a seemingly vain attempt to slow down her overactive brain enough to write non-fiction on subjects she knows a thing or two about. She also does not believe in the starchy use of English and ignores the type of rule that doesn’t allow for a sentence to be finished in a preposition. Her books are action-driven, and well-developed characters are her forte. Loves: freedom. Hates: her inner censor.