Release Tour for Her Lie, His Truth by Monika Summerville

HER LIE, HIS TRUTH
by Monika Summerville 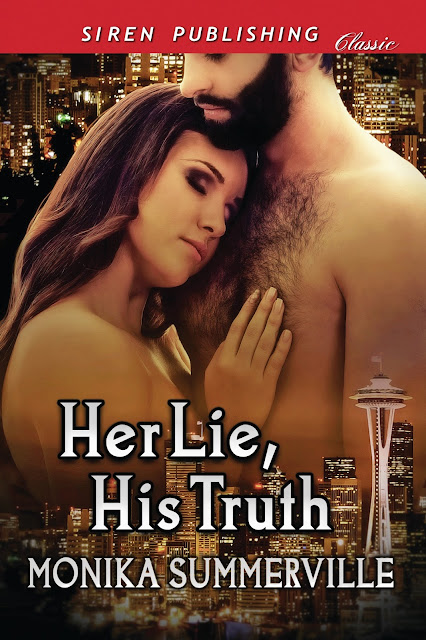 Seven years ago, as a parishioner of The Sanctuary of the Prophet, Kara King was asked by the administrators to help set up a journalist who’d been writing slanderous articles about their organization. They told her that the man had drug problems and abused women. At the age of twenty, Kara agreed to assist.

Seven years later she sees Jim Hollis, again. He just got out of prison for a rape and beating he didn’t commit. All he wants is the truth and will pull out all the stops to get it. Even lie to Kara.

With his brother’s help, Jim kidnaps Kara and begins trying to convince her that The Sanctuary has lied to her. Their Prophet is dead and they used her as a puppet.

Kara comes around and tells Jim everything that happened seven years ago. She also knows the administrators kept a file about what went on and if she can get that it would clear Jim’s name and overturn his conviction.

Will Jim be able to get Kara to tell the truth or will the lies mess up any chance for them at life?

Kara heard a male voice behind her and turned. He stood only a foot away from her, but she’d know him anywhere. His face looked different now that he wore a beard, but she still recognized him.

Moving her chin up, she felt a frown on her lips. “I’m sorry, can I help you?”

“Only in the Biblical way. Your hair color is different, but I know it’s you because your green eyes haven’t changed. I spent seven years in prison because of you.”

“You were a liar then and you’re still lying now. We can’t change what happened seven years ago, but I can get you to tell the truth now.”

Monika Summerville is an avid reader, loves good tense movies, and works hard on her writing. She lives in Western Washington State with her four cats, Agamemnon, Tazmania, Jasper and Jericho.

She has written The Risky Dance series - A Risky Dance, A Lost Dance, and A Flame Dance and Midnight Weary for Siren BookStrand.