Release tour for The Biker's Brother by Victoria Danann 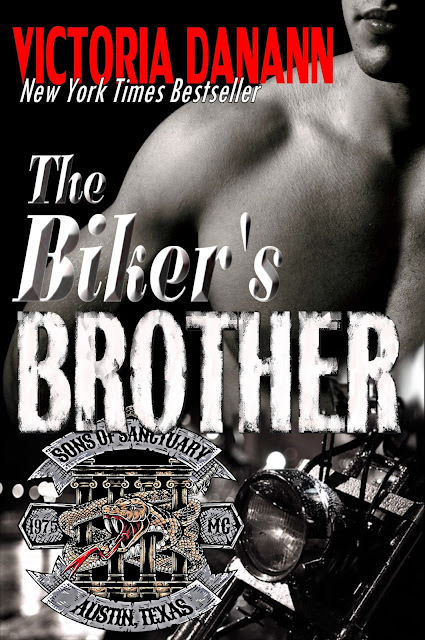 Camden Carmichael is running from a psycho ex. Lucky for her that her father has the means to hire Sanctuary Security to protect her until the divorce is finalized.

Two strangers set out on a road trip together. At the end of it, neither will ever be the same again.

“Off the interstates. Isn’t that going to take a really long time?”

She stared at his profile. “What exactly is the plan?”

“I’m taking you to our safe house in Austin. It’ll be home until the judge has signed off on your proceeding. My job is to make sure you get there alive.”

He turned on the radio and found a classic rock station.

“Just kill me now,” she mumbled.

She looked straight at him.

“The radio.” She pretended to have to scream over the music. “You’re not going to make me listen to that. Are you?”

He cocked his head as he stared at the road ahead.

“I’m nothing if not fair. What kind of music do you like?”

“Well, for starters, I like music that was recorded this century.”

He took his eyes off the road just long enough to be sure she caught the glare he gave her.

“You want to do a passive aggressive dance around what you want? Or do you want to just tell me straight up?”

She pressed her lips together, narrowed her eyes, and decided she’d underestimated Brandon. She didn’t think thugs had descriptions like ‘passive aggressive’ easily tripping off their tongues.

He gaped. “That is utterly impossible. A girl like you does not listen to country music.”

He narrowed his eyes and glanced at her.

“Okay. If you really listen to country music then tell me one thing about Garth Brooks that only somebody who was a fan would know.”

Without hesitating she said, “He actually wanted to be a rock star, but when he opened his mouth to sing, country came out instead of rock. So he gave into it and owned it. Although he did steal the big showmanship from rock stars. Lasers. Fire. Dancing bears.”

Brandon raised his eyebrows. “He has dancing bears?”

She laughed and shook her head. “No.”

Brandon had no idea if that was true, but because she said it with so much authority, and because it wasn’t the kind of thing a person would be likely to make up on the fly, he believed her.

She seemed to perk up at the small victory.

“How do you get satellite?”

Brandon smirked. “Seriously? How sheltered are you?” She frowned at the question and said nothing, since she had no idea how to answer. “This car is too old for satellite. You got radio. That’s it. Make do.”

She set to work turning the dial. He even got a little smile after she settled on a station. After all that work, before the first song was over, she was slumped against the passenger door, sound asleep.

He looked over at her sleeping form and shook his head. He could have changed the station but thought it might wake her and, for some reason, he didn’t want to disturb her. So he was stuck with listening to twang and fiddle for what turned out to be hours. By the time she woke, he was beginning to tap his fingers on the steering wheel and was thinking country might not be all that bad.

Two brothers, unknown to each other, are on a crash trajectory with destiny and two broken hearts.

"A hot, sweet romance that will make you laugh and sigh." - Cafeworld

Brigid was a graduate student at the University of Texas. It wasn't hard getting her thesis approved, but finding a Hill Country motorcycle club willing to give her access to their lifestyle was starting to look impossible. Then she got a lead. A friend of a friend had a cousin with family ties to The Sons of Sanctuary. Perfect. Or so she thought.

What she wanted was information to prove a scholarly proposition. The last thing she had in mind was falling for one of the members of the club. Especially since she was a feminist academic out to prove that motorcycle clubs are organized according to the same structure as primitive tribal society.

Brash was standing in line at the H.E.B. Market when his world tipped on its axis. While waiting his turn to check out, his gaze had wandered to the magazine display and settled on the new issue of "NOW". The image on the cover, although GQ'd up in an insanely urbane way, was... him.

After reading the article, he threw some stuff in a duffle and left his only home, a room at The Sons of Sanctuary clubhouse, with a vague explanation about needing a couple of days away. He left his truck at the Austin airport and caught a plane for New York, on a mission to find a mysterious guy walking around with his face.

INCLUDES BONUS NOVELLA: Intro to the Sons of Sanctuary MC, A Season in Gemini

Get your copy TODAY and find out why readers call Two Princes awesome sexy, fantabulous, and sentimental in the juiciest way! 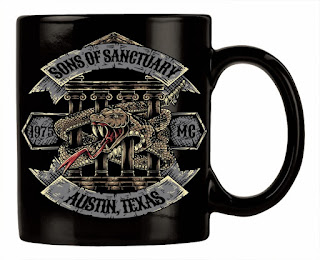