Release Tour for Journey to Dawn: Step One, Breathe by Reily Garrett

JOURNEY TO DAWN: step one breathe
by Reily Garrett 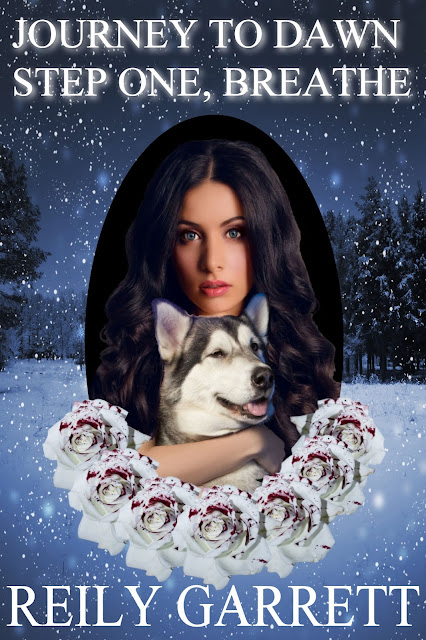 For those who have teetered on the brink of oblivion…

One out of six, Abrielle never thought herself a statistic until her idyllic life shattered one night in a dark and frozen alley. Assaulted and discarded to the street’s detritus, she fled the city in an attempt to outrun the horror and pain of humiliation. Her new existence consisted of fear, anger, and shame.

Through endless nightmares and cringing from every shadow, life continued to deliver difficult and exhausting lessons. The recovery process is not a linear transition, but fraught with triggers and mental minefields she must navigate to restore a semblance of normal life.

After two years of painstaking progress, Abrielle returns with her therapy dog to face the two men who’d loved her, praying they can all find closure and move forward with their lives.

This story revolves around one woman’s ascent from the hellish nightmare of sexual assault.

“Hello, Abby,” Morgan murmured, his greeting issued from lips that seemed a little firmer, the lines surrounding his mouth a little deeper, yet his eyes penetrated everything in their path, dissecting, evaluating. Some things never changed.

The tone said it all, declared what her mind couldn’t comprehend. That deep voice could seduce anything between heaven and hell, destroying months of mental preparation to remain neutral. The intonation released anxiety’s hold around her libido one syllable at a time until undeniable warmth invaded every cell in her body. The conflicting emotions equaled sitting at the devil’s side as flames licked up one’s nether regions, all while he fed small slivers of dry ice, which summed up her physical responses, burning both inside and out.

Nothing could stop her gaze from bonding to the dark eyes that haunted her sleep, the scattered, unconscious fantasies where she reveled in Morgan’s caresses even as her other partner drove her lust to uncontrollable heights.

All those pipe dreams had vanished one night in a cold, filthy alley.

“Hi, Morgan. You look…good.” If anything in the world could resuscitate her battered soul, Morgan was one of two that stood the best odds. But that opportunity had sailed long ago. She used to describe his looks as dark and dangerous—black hair, blue eyes, a stubborn jaw that reinforced the strong angles of his face. Then she’d learned new, horrific, and painful meanings of the terms.

Stepping up beside him, the other half of her lost life offered a sincere, heart-melting smile. “Hello, sweetheart.” Like Morgan, Finn didn’t make a move to enter her domain—as if aware of the changes she’d endured. Sandy blond hair accentuated dark, emerald eyes that turned stormy when heated with desire. Now, they held emotions she couldn’t disentangle, something unfathomable fringed with accusation that sliced through air thickened with anticipation. If they raked her over the coals, it was nothing less than she deserved.

Both stood over six-foot-two, able to cocoon her with a sense of security with their mere presence. Searching their gazes, her men, the ones she’d known and loved, were still there, but now tempered with a steadfastness that declared her determination inconsequential.
Security, that most coveted prize she’d thrown away in her misguided attempt to outrun terror and shame. However, she was no longer a submissive, anyone’s submissive, and she had the scars to prove it.
As much as Morgan’s self-confidence screamed dominance, she didn’t fear him. Like Finn, he echoed a time when she had taken their presence for granted. “Hello, Finn.” Jellied legs wouldn’t sustain her weight, despite how slim and toned she’d become through exercise and an inability to properly eat. She remained seated and indicated the chairs opposite her desk.

“Thank you.” In tandem, both men strode in and sat with even more self-assurance than she remembered.

“Before you say anything, I want to apologize…”

“For running away when you needed our help? Or for breaking our hearts?” Finn was the first to list her sins.

And this is supposed to be the easy part of recovery. “Actually—both. I know I should’ve done more than leave a note. But, well, I couldn’t. I was scared and confused and hurt.”

“Scared we couldn’t keep you safe?” A thread of Finn’s anger bled through his disbelief.

“We didn’t keep her safe, we failed. That’s why she ran.” Morgan closed his eyes as pain washed over his expression. Two fingers covered his mouth as if trying to suppress an old argument and emotions bubbling under the surface of his restraint.

“Look. First, it wasn’t your responsibility to protect me. I failed. My arrogance and stupidity landed me in that position. I’m sorry I ran, but nothing I can do will change the past. I needed time to heal.”

“If you were healed, you’d be in vet school. It was your dream.” Morgan accepted Crystal’s sniffing welcome before reaching under her head to stroke her chest. “She smells Lexus.”

“Who’s Lexus?” Their new submissive? Abby’s wary glance flicked from Morgan to Finn. An all-encompassing dread filled her stomach. Knowing some great upheaval approached at the speed of a freight train didn’t help one prepare for the devastation. She’d known this was coming.

“Lexus is our Bernese Mountain dog,” Morgan replied, his sad smile confirming an understanding of her thought’s direction.

“Things change, Abby. We get that. We’ve changed, too. Come to dinner with us and talk. You used to love the little restaurant down the highway before Saunter’s Cove. It’s quiet, and we can watch the late surfers while we eat.” Morgan’s tone threaded concern with the subtle command.

“She’s welcome to join us. They won’t have a problem getting along. Lexus is well socialized. The owner at Lucca’s Café loves dogs.” Morgan squashed her refusal before she’d given it voice. “You owe us that much, Abby.” Morgan’s innate strength flooded the room to surround her in swathing comfort.

Unlike Cami, Abrielle’s scar wasn’t visible unless she wore deep V-neck shirts or unbuttoned her collar, both remnants of a past life. Still, self-consciousness forced her to fiddle with the necklace around her throat, disguising her need to ensure adequate coverage.

As if understanding her impending refusal, Finn stood and ambled around her desk while maintaining eye contact. That same intensity used to scrutinize her every breath during a scene, watching her for signs of increased stress. “I know you’re not afraid of us, sweetheart. We just want to take you to dinner. No strings attached. We need to see for ourselves that you’re all right.”

“You’re going to want…” With two dominants in the room, one standing almost behind her, Abrielle’s words faltered. She merely nodded permission before Finn’s knuckles barely skimmed her shoulders in the lightest of touches, as if he could absorb her shame into his strength, so she couldn’t breathe it deep into her lungs with every inhalation.

A quiet gasp at the contact before heat, so much wonderful heat, invaded to the very depth of her spirit. She sighed as her lack of control saw her head tilting into his touch.

“We want nothing but to take you to dinner. We’ll keep it casual. We need to see that you’re in one piece and on a healing path.” Morgan’s grin widened with her obviously weakening reserves.

She hadn’t relaxed her guard in the presence of a man for two years. Now, she could barely focus as Finn’s strong fingers probed the tight muscles of her shoulders and neck, reminding her how often he’d done so after a scene. Though time never dissolved the horrific memories completely, it could dim and keep them from throwing her world off-kilter.

“If you tell me to stop, I will, but I know you’re enjoying this. Nothing is going to be the same as it was, but it doesn’t mean life can’t be good again, sweetheart,” Finn whispered close to her ear as if to avoid breaking the mesmerizing spell he weaved through his resistance-melting massage, one stroke at a time.

Reily’s employment as an ICU nurse, private investigator, and work in the military police has given her countless experiences in a host of different environments to add a real world feel to her fiction.

Though her kids are her life, writing is Reily’s life after. The one enjoyed…after the kids are in bed or after they’re in school and the house is quiet. This is the time she kicks back with laptop and lapdog to give her imagination free rein.

In life, hobbies can come and go according to our physical abilities, but you can always enjoy a good book. Life isn’t perfect, but our imaginations can be. Relax, whether it’s in front of a fire or in your own personal dungeon. Take pleasure in a mental pause as you root for your favorite hero/heroine and bask in their accomplishments, then share your opinions of them over a coffee with your best friend (even if he’s four legged). Life is short. Cherish your time.