Release Blast for Food & Romance Go Together Vol 1: An Anthology 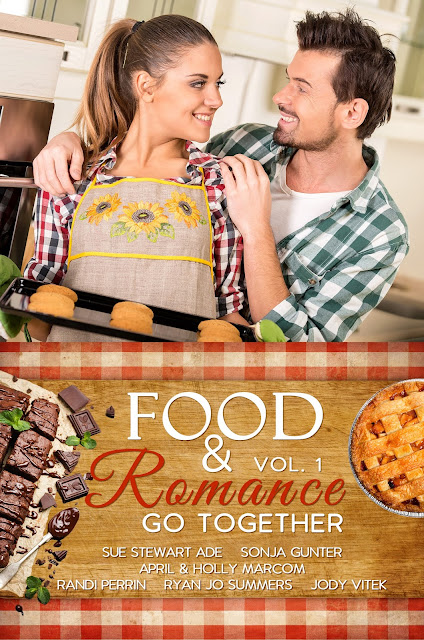 6 short, sweet stories perfectly pairing food and romance. Each include a yummy recipe.

Pumpkin Blossoms by Sue Stewart Ade
Jillian yearns for love and falls for a dog and her sister’s former boyfriend. But the dog bolts and the boyfriend seems to still have feelings for her sister. Can she find love with a man who can’t see who she really is?

Coffee Cake Chaos by Ryan Jo Summers
Avianna Goodman needs cash. That's why she agreed to cater her ex-boyfriend's engagement party. Seeing Sawyer again confirms Avianna still isn't over him. The biggest mistake Sawyer Steele ever did was walk away from the one girl he was crazy about. Now Avianna's back in his life--and he can't have her.

Peanut Butter Kisses by Jody Vitek
Beth Canton attends her ten-year class reunion to catch a glimpse of her long-time, school-girl crush, Hank McGrath, but doesn’t hope or even dream of anything more. She leaves with more than a glimpse, while Hank can’t get enough of her peanut butter kisses.

Boston Crème Breakdown by Randi Perrin
Kestin just wants to return to life as normal after returning home from the war, but there's no way his life will be the same again. Looking for easy money to make bills, he stumbles over an ad to teach perpetually-single Erica to cook, and can’t resist answering it. He never expected to actually get the job—or to be attracted to her.

The Chocolate Queen by April & Holly Marcom
In a world sprinkled with superheroes, you never know when the person beside you is one of these few elite. When Clarissa begins to fall for a guy who harbors a super secret, it feels like she’s not good enough. But he may just help her discover a super sweet secret of her own.

Sawyer blinked, drawing back. “What makes you think you didn’t get the catering job?”

“Isn’t that what you came here to tell me? Why you went to such extremes to find me to deliver your mother’s decision in person? She gave the job to another caterer.” She knew her voice was rising but she didn’t care. “I wasn’t good enough back then to date you and I’m not good enough now to cater your party.” She crossed her arms over her chest, ending with a sigh.

Sawyer held out his hands to her. “Wait a minute. Back up a second, Aviana.”

“Why did you come here?” Never in her wildest dreams did she think she would ever ask such a question of him, like this, but her pride demanded it.

He lowered his hands. “To tell you that you’re hired. You have the catering job.”

“Yes, you can get that roof for your aunt and uncle now.”

“Your mother picked me to cater your event?”

He nodded. “With some heavy prompting from me. It’s my celebration after all. I think the coffee cake was a strong convincer.”

Aviana could only imagine how that conversation had gone between them. She had the job? “At my asking price?”

“So why didn’t she just call me with her decision? Like she said she would?”

Sawyer leaned back, head tilted to one side. “Aren’t you glad to see me? Or did the light dancing in your eyes when we met yesterday lie?”

“Even now, upset with me as you are, your face tells me you still yearn for me .Does your face lie to me?”

“No, but what does it matter? How can you want me and still pledge yourself to another? It isn’t fair to any of us.”

He scrubbed his face and then pulled her to him. “Aviana, I need to know. Do you love me?”

“Yes, I do.” The admission tumbled out before she could reconsider.

He exhaled a heavy sigh. “Good.” He wrapped his hand behind her neck and drew her close, kissing her.

He tasted of fresh mint and cinnamon. He felt solid and warm. Her fingers reached out to explore, lifting his sweater and going under it to find the matured, toned muscles.

His fingers twined in her hair. Bolts of white heat rippled over her and a moan escaped her. Her eyes slid closed as his fingertips moved to slowly drag along her back.

Pulling breathlessly apart, she gasped for air. “Wow.” She ran her tongue over her lips. He’d grown into a great kisser.

She smiled. “Guilty pleasure.” She was pleased he was just as winded as her. It felt just like when they had made out years ago.

Then that contemplative, serious look returned to his eyes, sobering her. “Do you trust me? Completely?”

RYAN JO SUMMERS I was born in Michigan and grew up surrounded by books, pretty much all piled and stacked in my room. I had bookshelves to hold them since I could remember. Christmas and birthdays were easy, just buy me books.
My tastes in subject matter and genres grew as I matured.
It seemed only natural to write as well as read. The first book I wrote was at age ten and was about a twelve page story that I also illustrated and stapled together into book format. I was so proud! If only I still had that about somewhere.
Since then, I never stopped writing. Some articles made it into magazines, some stories made honorable mention in contests, my journal has grown thicker. Writing poetry also serves as therapy to life's hurts, a trait apparently inherited from my dad's aunt. Writers, poets and songwriters run through my lineage. I guess you could say I come from a line of wordsmiths.
In 2012, selling "Whispers in her Heart" for publication has been not only a dream come true of becoming a novelist, but also a pinnacle of thirty odd years of writing. With each new story, novel or novella that comes out, I grow as a writer and take another step on this incredible journey called life.
Facebook ✯ Website ✯ Twitter ✯ Amazon

SUE STEWART-ADE lives in Pana, Illinois, with her husband, Larry. When Sue was growing up, she lived right across the street from one of the greenhouses which made Pana famous as the City of Roses. Her grandfather worked in the coal mines. Some of her memories are as beautiful as Pana's prized roses; others are as dark as the coal mined beneath the town. She chose to include her maiden name "Stewart" because she never wanted to forget where she came from and the people who helped her.
For thirty years Sue taught English in Pana and presently teaches for Lake Land College.
Her favorite part of teaching has always been creative writing. She loves words, their passion and their healing power.
In her writing, Sue explores mother/daughter relationship and has worked with Hope Edelman author of MOTHERLESS DAUGHTERS.
Her book FRIENDS FOREVER is a suspenseful read about friendships and mothers. How far will a mother and friend go to protect a child?
Facebook ✯ Website ✯ Twitter ✯ Amazon

Born and raised in Minnesota, JODY VITEK has remained close to home. She has traveled throughout the United States and to the Bahamas. Although her family never moved during her childhood, she attended six different schools and made many friends over the years.
Growing up, Jody enjoyed reading V.C. Andrews' the Dollanganger series, starting with Flowers in the Attic, S.E. Hinton, and Stephen King to name a few. As an adult her author's list and choice in genres has broadened. You could say Nora Roberts has been her favorite romance author. Jody has shelves of books read, yet to be read, and those she plans to keep.
After graduating high school, unsure of what she wanted to do, Jody decided against going to college and became a nanny. During her two years of caring for the two children, Jody was fortunate enough to travel with the family across country to Montana to a guest ranch and another vacation to Cancun, Mexico.
Jody met her future husband before she was to leave the state for another job. Unable to move away, she contacted and informed the employer of her decision. Three months later Jody was engaged. A year later she became Mrs. Jody Vitek. They have survived over twenty years of marriage and plan on spending many more together.
Jody and her real-life law enforcement hero have been lucky enough to travel to the Bahamas, Florida, and drove through many states on their way to Quantico, Virgina. Most recently they took their three children on a Disney cruise to the Bahamas.
If there is one thing Jody has learned during her lifetime - there is a higher power and the higher power has plans for us we don't even know about.
As a full-time administrative assistant, mother of one (two if you want to include her hero) and another child on the way, Jody never dreamed she would be a writer. She was going back to work after the birth of their second child. She returned for only six months before leaving to become a stay at home mother.
Jody began writing her first manuscript, which is now filed away in a box, and has started others only to be shelved for another writing project. Jody wouldn't have the opportunity to write if she were still a working mother (the higher power).
After being home for four years, Jody and her family were blessed with a higher power miracle. Another child was on the way. A four-year post-vasectomy baby! Imagine their surprise.
Writing was postponed for a year and was slow to pick back up. Now back in the chair with fingers tapping on the keyboard, Jody is moving full steam ahead in her writing career.
Facebook ✯ Website ✯ Twitter ✯ Amazon

RANDI PERRIN has spent her entire life writing in one form or another. In fact, if she wasn't writing, she'd likely go completely and utterly insane. Her husband has learned to recognize when the voices are talking in her head and she needs some quality time with an empty Word file (the key to a successful marriage with a writer).
A pop-culture junkie, she has been known to have entire conversations in movie quotes and/or song lyrics. (You'll see this come up in her writing as well.)
She is the author of Virtue of Death, Promises of Virtue, Wreck You, and a story included in the anthology Unintentional.
Facebook ✯ Website ✯ Twitter ✯ Amazon

SONJA GUNTER Born and raised in the cold and beautiful Minnesota, she escaped to Illinois for seventeen years to raise two boys, and now calls Florida home. She and her husband, whose always her hero, have a new family to worry about; Cookie, an Assui-Po dog, Oreo, a black and white cat who thinks he is a dog, and Chip, a ragdoll cat, who their sons compare to Eeyore.
She loves to travel, read, and bowl. You can catch her writing her next novel at the lanes.
Sonja encourages you to check out her web site, sonjagunter.com, for more into and don’t be surprised if she lets her Norwegian heritage come through in her stories. You betcha!
Facebook ✯ Website ✯ Amazon

During the day, APRIL MARCOM works as a substitute teacher for grades K-12. But in the evening, the alluring world of romance takes over as she pours it out on paper. Her favorite thing to do, though, is to spend time with her sports-car-loving husband and three incredibly energetic children. She also loves chocolate, her five very rowdy dogs, and livin’ the simple life out in the country. April grew up a southern bell in Mississippi, but is now a proud Oklahoman.
Facebook ✯ Website ✯ Twitter ✯ Amazon

Ryan Jo Summers is offering her own private giveaway.