Release Tour for Luck of the Draw by 13 Bestselling Authors

LUCK OF THE DRAW

Feeling Lucky? Check out LUCK OF THE DRAW. . .

13 lucky stories EXCLUSIVE to this boxset available for a LIMITED time! 13 tales of unimaginable luck - 13 fascinating novellas of love, loss, and mystery. From lotteries to sweepstakes, poker to roulette and horse racing to wishes, these 13 stories will make you wish you'd been the winner!

These 13 novellas are BRAND NEW and have never been published. Written by USA Today Bestselling, International, and Bestselling authors. 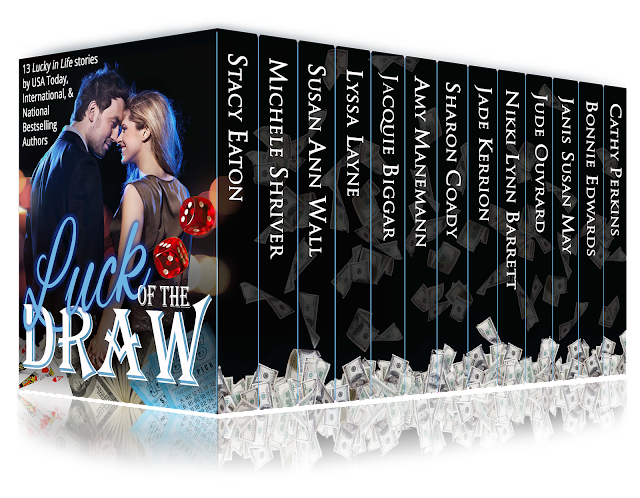 Haley Rosewood is overworked and underpaid and can barely afford to care for her daughter. When Devon Carrington asks her to pick out lottery numbers, she laughs in his face. She is a true believer that no one really wins these games. But what happens a few weeks later when those numbers are played again and they do win?

When Wren Morrow wins a sweepstakes for a walk-on role in her favorite actor’s new movie, she’s elated. Recent film school graduate Trey Lozano has left his troubled past behind him and landed a job as the second assistant director on a new movie, where he’s assigned to direct Wren’s big screen moment. Will a simple fade to black role fade into love, instead?

Needing money, Cynthia Munn accepts Sean Beckett’s proposition to accompany him to his sister’s wedding in Vegas. To get into a high-stakes honeymooner’s game, they get married and win big – until Cyn loses everything in a risky game behind Sean’s back. She discovers that losing her heart to the one man she didn’t want to give it to – and then losing him – is the highest stake of all.

On the outside, Julie and Shawn have the perfect marriage--all they need is a child to complete their family. When fate is found taped to their door, will their family finally become whole?

When professional poker player Matthew Shaughnessy wins the pot of a lifetime, he didn't expect to land himself a fiancée. Cassandra Gardener is left with little choice but to play the part of a Texan's fiancée for a week if she wants to clear her father's gambling debt. Can two people with so much to lose win the biggest bet of all- love?

Going All In by Amy Manemann, International Bestselling Author

Big city lawyer, Tucker Williams, returns to his roots to help out his family. Small town living is no longer his style, but a run in with former flame, Hadley James, has him reconsidering. When a chance wager winds Tucker up for auction to the highest bidder, Hadley will have to decide if she’s ready to toss in her cards and go all in.

Shy, retiring Carissa takes a chance on a hot tip at the races. (Thanks Grandpa!) When she collides with Joseph her luck changes again...but she's too anxious to enjoy it. Joseph thinks she’s adorable and he’s finally met the woman he can have a life with. Carissa thinks she can trust him when an overheard conversation ruins what they have.

Marie Vargas thought her love with Phil Casteen would last forever, but she was wrong. Unhappily divorced, she wins a $1,000,000 lottery and takes a trip to Key West, where Phil has made a new life for himself—a life that would be better if he had her money.

So Unlike Me by Nikki Lynn Barrett, USA Today Bestselling Author

Lizette Monroe agrees to her twin's plea to switch places after she wins a sweepstakes to Paris. France, here she comes! Except it's a small town in Tennessee, and Lizette runs into none other than Dirk Ramsey, her twin's best friend from middle school. Let the complications begin as romantic feelings develop for the twin Dirk once pegged as snobby.

Everything changes when a run of good luck leaves Gracie in a position she never imagined. Freed of the rat race, she is finally able to contemplate her identity, and her dreams. Is she ready to move on? Will her newfound fortune pave the road to happiness? Or will wealth leave her poorer than ever before?

Love in the World of Make Believe by Janis Susan May, International Bestselling Author

Delighted to win a role on her favorite TV series and meet the star Brick Daniels, Edith Whiting discovers he is not a nice man. She is kept from humiliation by the second lead, Lupo deGermain. Fearsomely scarred and extremely private, Lupo finds himself falling for Edith, but can he reveal his feelings when he carries so many secrets?

Ashlee Branton’s stroke of luck is giving her and her son a new, settled life back home. Except that returning to Blaine Washington means facing her son’s father, Brick Harcourt, in a most unsettling way. Ashlee has two pasts now, one with Brick and one with an ex who wants to crash their reunion. Will she run again or stay and sacrifice money for love?

Dealing blackjack at the Tom Tom Casino isn't Maddie Larsson’s dream job but she needs to cover a looming college tuition bill. Busted takes on a new meaning when her favorite customer, a former Poker World Tour champion, is murdered. Maddie better prove she isn't a gold-digging murderer before the real killer cashes in her chips. 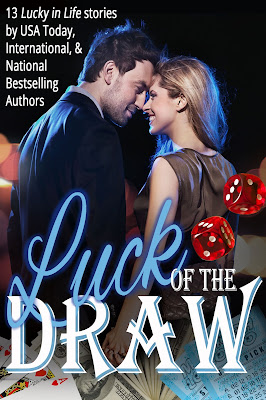