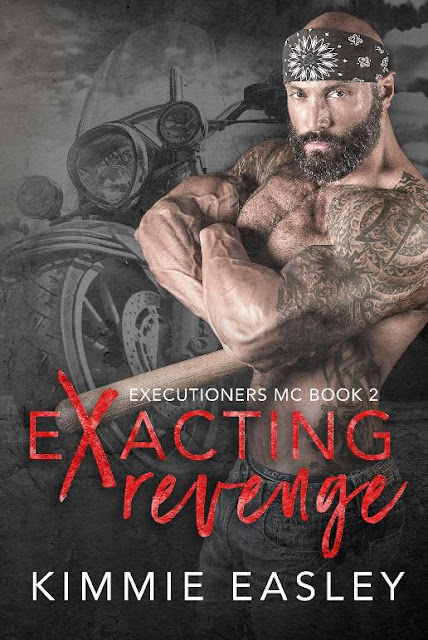 Ronin grows hungrier. Only two things can feed his appetite. Jolene and power.

With a rogue soldier and an enemy club fast on their wheels, the Executioners are left with little option to keep their family whole. Now, away from home territory, Ronin is finding out the trouble may hit closer to the heart of the club.

Can he keep Jolene safe, steer his brothers in a profitable direction, and be the Soldier at Arms he’s called to be without falling on the wrong side of the pavement?

Exacting Revenge is the second, spicy installment in the Executioners MC Series.

A mixture of blood and spit flies, splatting across my right cheek. I jerk the worn bandana from my back pocket and wipe the shit from my face, not giving it a second thought.

Herc is enjoying his rank today. We’ve been tasked with finding Ruth. It’s about fucking time.

“You ready to tell me something I can use?” I force my boot against the shattered man’s throat. He uses both hands, struggling to push my weight away. It’s a futile move. I press harder.

I refuse to make a move on the Pistol Kings at this point, seriously pissing off the old man. He doesn’t know that I have certain information, and it’s important that I keep it that way.

When I think the loser has had enough, I release his windpipe. Herc, on cue, straddles the man, cracking his massive knuckles.

He pries open his mouth, breaking the dried blood crevices. “I swear…”

Herc lands a square fist into his ribs, causing him to buckle.

Then he says something that none of us expected. “You’re gonna have to go ahead and kill me. I don’t know nothing,” he squeaks through a strangled voice.

The weight of Clint’s heavy hand lands on my shoulder.

“Son of a whore!” Troy kicks gravel across the railroad.

“What do you wanna do, VP?” Clint adjusts his cut.

I stare through my best friend as if he weren’t standing there. I’m at a loss. I’ve exhausted all avenues. This bastard was my final option.

Ruth’s blood is on my hands.

I rip my gaze away and scowl at the Enforcer. “Go back in.”

My words send the wounded man on squirming on the ground into a frenzy.

As Herc settles his heel into the enemy’s gut utilizing all of his weight, my cell rattles in my pocket.

If it were anyone other than Jolene I would send it to voicemail, but not with the dick move way I ditched her this morning. I’m already in the shit house. It’s never too soon to start kissing ass.

“Hey darlin, I know you’re pissed, but seriously just give me a second to…”

She spews shit I thought I’d never have to hear come from her mouth. The kind of shit that only comes from deep inside the club.

My dense chest heaves as I tuck the phone away. “Cut him loose.”

Everyone stops and whips their heads in my direction with the exception of the mangled body, whose eyes are both now swollen completely shut.

“What’s up, brother?” Troy jumps on his sled.

“No time. We’re headed to Jericho.”

We ride without stopping. If I could will this fucking bike to go faster, I would. The fear in Jo’s voice is engrained on my soul. I can’t handle it. There’s nothing in this world that can bring me to my knees like that sound.

I’ve only heard it once, the night she was lying on the singed grass surrounded by ash and burning splinters of wood.

The night we lost our baby.

My small town calls me home. I zip through the stoplights and ignore the traffic signs.

My only thoughts are on repeat.

I wouldn’t have wasted the time circling around to the back, but I knew the door was already open.
I fly off my sled. I can hear my brothers speak, but tune them out.

My pulse races, pumping scores of frenzied blood though my heated veins.

I spot her and don’t stop to assess the situation.

I can’t get my hands on her quick enough. My mind is blank and my body moves on automatic pilot until I snake my arms around her trembling frame, lifting her off the ground, holding her tight like a scared child with a stuffed animal.

Just like that all of the stifled emotions sending me reeling.

Mist fills my eyes as I bury my damp face in her neck. “I thought I wouldn’t make it in time.”

She strokes my neck. “I knew you would.”

“What the fuck?” Clint stalks through the Clubhouse.

“It’s Brad.” I turn back to the crowd, planting Jo back on the floor, but refusing to let her go.

“Yep. Jolene confirmed it.” A visible ripple shudders through Jessa.

The boys start poking and prodding at what’s left of the nasty, stinking body parts. None of us notice the light rap on the front door, not until the person pounds on the locked gate.

Everyone in the room draws their weapons, females included. The moment I have to prepare for battle means I have to take my hands off my woman and that sends fury to not only deep in my gut, but my dark, dusty heart, and that has become a whole new level of danger for me and any mother fucker who decides to cross my path sideways.

More ready than I have ever been. 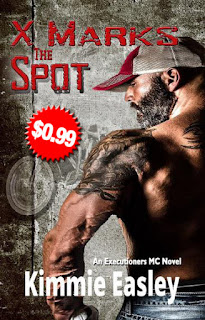 Jolene Miller barely escaped the dark underworld of being the president’s daughter of a notorious motorcycle club. After having her heart broken by Ronin, the MC’s Sargent at Arms, she tried to navigate a normal life as an up and coming criminal defense attorney.

When the only family she’s ever known comes under fire, Jolene rushes home to Jericho, California to step in - only to find it’s not just the club who needs her.

Ronin is wanted for murder.

Can Jolene let go of their tortured past in order to save their future?

Kimmie is an international best selling romance author who has grown up traveling the country, rarely settling in one place for much longer than a minute. Being no stranger to heartache and pain, she allows her unconventional childhood to fuel her writing.

Kimmie is addicted to all things books, wine, cupcakes, and flip flops. She is a homeschool momma, southern wife, and pug wrangler.

Kimmie can be found somewhere in the south writing wine worthy stories.