Promo Tour for The Unwilling Recruit by John Evans

THE UNWILLING RECRUIT
A John Hunt Novel
by John Evans 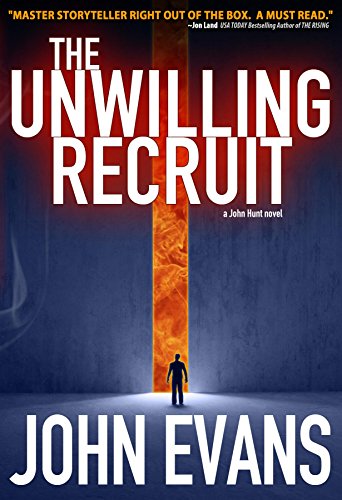 Journalist John Hunt is known for taking any risk necessary to get the story. That is until his careless ambition leads to a hefty price. Reporting in Syria, John leads his cameraman Andrew three miles out of the safe zone. An explosion strikes. No one should have survived. But John did. After six months of rehabilitation, John is finally out of the hospital, he’s also out of work, and a horrific disfigurement is a constant reminder of that day. Already skating the edge of sanity, he is pushed further when his deceased cameraman pays him a visit. Both men should have died that day, yet one survived. Why, and to what end?

Hunt fearfully watched as Carl proceeded to withdraw a long, straight blade from within the folds of his jacket. It had twin edges which glinted wickedly in the pale light that came into the alley and it’s total length was a little more than a foot, easily enough for the job in hand. Carl’s face clearly showed what he intended to do next, however, he never got the chance.

Without warning Hunt heard a strangled grunt from the assailant holding him. The mans’ grip released and Hunt dropped, surprised, to one knee while the big bruiser collapsed like a felled tree, flailing futilely at his own neck.

Hunt had no time to ponder this development as, before he could move, he felt, rather than saw, a figure pass swiftly over his head, rebounding lightly off the wall where he had been restrained. Before he could look up Hunt heard three more grunts of pain swiftly followed by heavy thumps. By the time he could view his surroundings there was only one of his attackers left standing. Carl was in a fighting stance, his blade held low in his right hand, face firmly fixed on the figure facing him.

It was this figure that also drew Hunts’ attention, it belonged to a female. She was crouched low in a wide fighting stance with most of her weight balanced onto her right leg. Dressed in a figure hugging, one-piece black cat-suit which zipped up the front, calf-length military style boots and black leather gloves she looked both incredibly sexy while at the same time being extremely dangerous. She held a small curved blade in her left hand which reminded Hunt of an eagles’ talon. Hunt was transfixed. He knew this woman, he’d met her once before under very different circumstances. The jet black, waist length hair, the strong, prominent cheekbones and aquiline nose. This was Jane, his nurse from the hospital.

Carl and Jane were facing each other with respectful wariness, both poised like coiled springs. Hunt held his breath in rapt fascination. In the end it was Jane who moved first. She lunged forward, obviously hoping to catch Carl off guard, but he had been expecting this and immediately moved to parry with his own blade, only realizing too late that the entire move had been a subtle feint. At the last moment Jane ducked to the side and spun on one foot, bringing her tiny blade in a wide arc towards Carl’s now exposed side. With a speed that belied his bulk Carl altered his direction just enough to bring his blade around and block the strike, but now he was off balance, and he knew it.

A breathtaking flurry of strike and counter strikes erupted as Jane inexorably forced the larger, slower man back, their blades igniting sparks as they connected.

Carl cried out in pain, his blade slipping from nerveless fingers to clatter uselessly on the cobbled ground. Carl grabbed at his right forearm and Hunt could see blood flowing freely to the ground from his hand. Realizing he had lost this battle Carl cast a last, hateful glance towards Hunt, before turning and fleeing. Jane followed him as far as the entrance to the side alley before stopping to watch him make his getaway.

Hunt sat in silence, his back against the wall of the alley as he watched Jane return, her movements now casual and relaxed. She reached the first of the four prone figures and placed two fingers to his neck, checking for any signs of life. Satisfied, she wiped her blade on his shirt and placed it back in her scabbard, then moved quickly to the next figure. The silence in the alleyway was quickly becoming oppressive.

Jane took a hard look at Hunt. “They were here to kill you. This seemed like a better option to me.”

Having spent ten years working as an actor and film-maker John was forced to give that career up five years ago in order to look after his mother following a debilitating stroke.

Today, John works from his home in Northern England, exploring new ways to bring out his creative nature. The Unwilling Recruit begins a long running series of novels that John hopes will keep readers entertained for many years.