AT THE BARRE by E.M. Denning

AT THE BARRE
The Studio Collection #2
by E.M. Denning 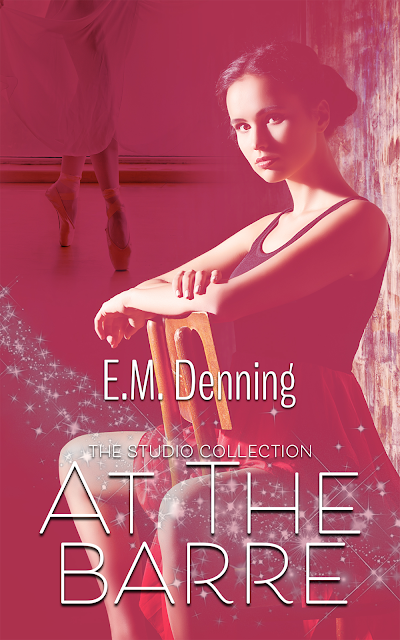 Allison Elliot was too short to be a ballerina—according to the studio that turned her away. Determined to pursue her childhood dream of learning ballet, she signs up for lessons at a different studio and quickly catches the attention of her instructor.

Josh Owen is more than happy to be her teacher, and maybe more if she’d let him, but she doesn’t seem to notice his advances. Is she oblivious to the obvious chemistry between them, or is something more going on? When Allison threatens to drop his class, Josh urges her to reconsider. Will she stay, or will she give up on two dreams—ballet and love?

**The Studio Collection is a series of short, hot, romantic standalones**

Allison Elliot was too short to be a ballerina. That’s what the instructor at the last studio told her when she went there to sign up for lessons. It didn’t matter that she was only looking to fulfil her childhood dream and had no intentions of dancing professionally. The woman had looked down her nose at Allison and picked her apart. Her thighs were too thick. Her ass was to wide. Her shoulders were too boxy, and according to the woman who towered over her, five-foot-three was definitely too short.

Allison clutched the strap of her purse and entered the studio. Tentatively, she approached the front desk and cleared her throat to get the attention of the mouse-like girl behind the counter.

The girl behind the desk flicked her gaze over to Allison and flashed her a smile. “What can I do for you?”

“I’d like to sign up for ballet.” She spied a name tag pinned to her shirt. “The adult beginner class, please, Heather.”

Her fingers flew across a keyboard. “You have a choice between Monday and Thursday evenings at seven or Tuesday and Friday evenings at eight. Classes run for two months at a time, the sign-up fee is two hundred and fifty dollars.” Her gaze flicked up to Allison as she reached to fish out her credit card. She glanced around then leaned closer and whispered. “And don’t ever be late. Mr. Owen can’t stand tardiness. He’s a bit of a hardass, but he’s a great teacher.”

“Thanks for the warning.” Allison grinned and passed her credit card to Heather.

“Great! I’ll just need your name and address, and you’ll be all registered and ready to go.”

“Do I need to wear a leotard or a tutu or anything?”

Heather laughed so hard she snorted, then quickly reddened and covered her mouth. “Gosh, no. Stretchy, comfortable clothing is necessary, and you can wear a leotard if you want to, but they’re not required.” She handed the credit card back. “Your first class is Tuesday night. Have fun.”

Though she left the studio feeling like a million dollars, by the time Tuesday night rolled around, Allison was a complete wreck. Once she got there, it took five minutes for her to convince herself to get out of the car.

She walked up to the doors, her stomach doing flip-flops the whole way. When she reached for the door, her keys slid from her fingers and clattered against the sidewalk. She swore under her breath as she bent to retrieve them.

Allison looked up, way up, at the tall man who caught the door and now held it open for her.

“How’d you guess?” A nervous laugh shook out of her. “I almost cancelled three times today.”

“I’m sure you’ll do fine.” His blue eyes sparkled when he smiled, and he had the most delicious dimples. Allison guessed, judging by the crows' feet at the corners of his eyes and the flecks of silver in his black hair, that he was somewhere around thirty-five.

“I wouldn’t be so nervous, but I heard the instructor is a bit of a hardass.”

This seemed to amuse the man and his smile deepened. “I’m Josh.” He extended his hand and she took it.

“It’s a pleasure to meet you, Allison.” Josh withdrew his hand, then motioned toward the open door. “We should get inside. I hear the instructor will make you pirouette until you puke if you’re late.”

Allison went red, then white, and forced herself to go inside. She smiled nervously at the man as he held another door open for her. “You’re in the beginner class, too?” She asked as she slid past him and went inside.

His eyes sparkled and the corner of his mouth twitched in amusement. “You could say that.” He strode to the front of the room and cleared his throat. The whispers in the room hushed at once and all the head snapped to him when he started to speak. He looked directly at Allison. “Hello, everyone. My name is Josh Owen, and I’ll be your instructor. Welcome to adult ballet.”

Allison held her breath and willed the earth to open up and swallow her whole.

Despite the warning from the girl at the front desk, the class, and the instructor, proved to be equally pleasant. There was plenty of laughter as the group of twenty and thirty-somethings bent, stretched and tried to contort their bodies into position. By the time class was over, Allison’s stomach muscles ached from laughing. She couldn’t remember the last time she’d had this much fun. The best part had been when Josh strode over to her and corrected her form. His powerful hands gripped her shoulders and he made her square them and stand straighter.

Her stomach fluttered when she caught a whiff of his musky cologne. When she turned her head and looked up at him, he winked. She quickly tore her gaze away from his and hoped that the whole room didn’t see her scarlet cheeks.

At the end of class she watched people flood out the doors to rush home, or wherever it was they were going. Allison was the last to leave. She’d purposely taken her time putting her shoes on. She slung her purse over her shoulder and cast a glance at Josh.

“Hardass?” She raised an eyebrow. “Really?”

Josh shrugged as he took his iPod off the dock and slid it into his pocket. “Heather started that when I first met her. She said she took one look at me and decided that I was a hardass.”

“Why would she say that?” She opened the door to leave and he followed her.

He shrugged. “I never asked.” He paused, as if to consider her question more. “Maybe it’s because I’m so tall.”

“Nope,” Allison said in a definite tone. “That’s not it.”

“You sound so certain.”

“A girl thing?” He seemed puzzled.

“Girls are shorter than guys. We’re used to people being taller than us,” Allison laughed. “At least I am. Tall people aren’t intimidating.” Allison paused at the main doors that opened out the parking lot and looked at him. “She probably said it because she took one look at you and decided that you were hot.”

“You think she thinks I’m hot? Why would you think that?” A broad grin spread across his face and suddenly Allison wished she’d kept her mouth shut.

Before she could dig herself a deeper hole she pulled the door open and escaped into the parking lot. She clutched the strap of her purse and made a beeline for her car.

“What did you decide when you first saw me?” Josh followed beside her. Her short legs went twice the speed of his much longer ones.

“I thought you were nice.” Allison reached her car and dug for her keys. “Then you tricked me at the door. You made me think you were a student.”

Josh crossed his arms in front of himself and leaned against her vehicle. “Yeah. That was fun, wasn’t it?”

Allison shot him an icy glare. “And only mildly humiliating.”