MEASURE FOR MEASURE by E.M. Denning

MEASURE FOR MEASURE
by E.M. Denning 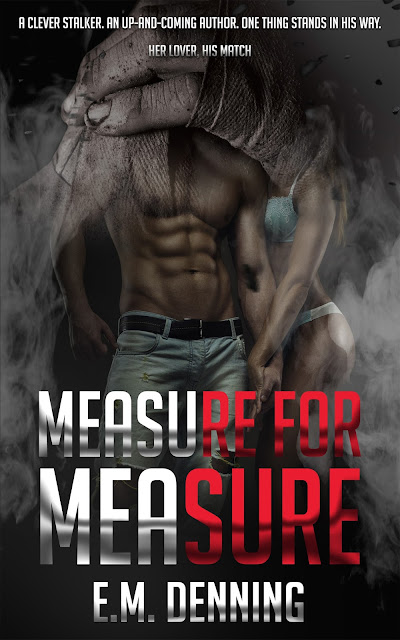 Millicent Hughes—Millie—is an author on the brink success. As a former foster child, her past wasn’t a bed of roses, making her current success even sweeter. But despite her skyrocketing career, she knows something is missing: him.

When her best friend is killed and she’s attacked by what police believe is an obsessed fan, her life is thrown into turmoil. Even her publisher comes under scrutiny. Can her former foster brothers keep her safe or will they have to take drastic measures to catch a killer?

The footsteps in the hallway meant one thing.

I’d pictured this moment a million times. Everything was perfect for her. Candles. Flower petals. The atmosphere was perfect. Today was the first day of my happy ending. I was supposed to have that before, but Rachel took everything. Millie will give it all back. My one regret about today was that I had to come here straight from work to get everything set up in time. I wanted to look nice for her, to have a chance to shower and clean up. But we could also do that after.

I smoothed my shirt as her key scraped in the lock. I checked my breath. My watch. She was early, but only by a few minutes. I grabbed a long stemmed rose in one hand and the bottle of wine in the other. I heard her relock the front door and start down the hallway.

I waited for her to come into her room, but I heard the guest bedroom open and close instead. Slightly irritated, I exhaled and then squared my shoulders. I couldn’t wait anymore. I had to go to her. My skin tingled with anticipation. I’d waited so long for this moment that even one more minute felt like torture.

I crept down the hallway and opened the guest bedroom.

“Surprise!” A female voice called when I opened the door. She jumped out from around the corner. Her black ponytail swung behind her.

“You’re not Millie.” I said, instantly angry. This couldn’t be happening. Not now. Not today. This intruder was going to ruin everything.

The smile on the woman’s face quickly faded. “Neither are you?” She took a step back. “What are you doing here?”

“I wanted to surprise Millie on her big day.” I took a step toward her. I had to try and convince her that this was not a good night for company. “Well, I’m her boyfriend actually. I had sort of a special evening planned for us. What are you doing here?” She wasn’t supposed to be here. She didn’t even live here.

The woman frowned. “Millie doesn’t have a boyfriend, and if she did, she would have told me.” She pulled a phone out of her back pocket. “So I’m going to give you one more chance to tell me what you’re doing here, or I’m calling her.”

“That’s really not necessary. I promise.” I smiled at her.

The woman arched an eyebrow at me. “How’d you get in?”

“I had the superintendent let me in so I could surprise Millie. Her big signing was today and I thought we could celebrate after.”

“People don’t just let themselves into other people’s houses. That’s creepy as fuck.”

I felt my smile fade. This woman was going to be a problem. That was unfortunate. Usually women weren’t a problem for me at all. “You let yourself in.”

“Then you know how important today is for her. I want to help her celebrate. I’ve made everything special for her.”

The woman’s eyebrows slammed down and her face twisted in disbelief and confusion. “I don’t think so.” She said as she started to dial.

I didn’t think. My arm swung and the wine bottle met the side of her head with a sickening thud. The phone clattered against the floor as crumpled into a heap.

I checked the phone. She never got a chance to dial.

The heap of girl on the floor moaned.

Adrenaline surged through me. This bitch. This bitch ruined everything. Time was ticking. I had to get rid of her. I hovered over the woman and as she started to stir I brought the wine bottle down against the back of her head again. And again. When the bottle struck a third time, bones crunched. When the bottle struck a fourth it came back bloody. When it struck a fifth time, she stopped breathing.

I stood up. My entire body shook as I stared down at the corpse on the floor. I’d killed people before, that wasn’t new to me. But never like this. Never with my bare hands. Never before had a death been so personal, or satisfying.

But I didn’t have time to dwell on this new development. I had a body to dispose of.

I washed the wine bottle off in the bathroom sink—why waste perfectly good wine? Millie and I could drink it after I took care of this small inconvenience.

I eyed the corpse and gave it a little kick with my foot. Idiot bitch. She ruined everything. I heard the door open. Keys clattered on the counter. A cork popped. Then she started down the hallway.

Shit. I put the wine bottle down on the bed and listened at the door. Keys clattered on the counter. A cork popped. She walked down the hallway and into her room. I couldn’t breathe as I listened for her reaction.

Something hit the floor, then a moment later I heard her yelp. It sounded as if she hit the floor too.
Shit. No. She was scared. She wasn’t supposed to be scared.

Everything was falling apart.

I heard her race for the door. I had to stop her.

I ran after her. Too overcome with desperation to speak. I grabbed her arm as she reached for the door. An elbow flew back and caught me in the stomach right under the ribcage. My breath rushed out of me and she shook my grip and vanished into the hallway.

I grabbed her keys and cellphone off the counter on impulse and shoved them in my pocket. They might come in handy later. I didn’t run after her.

I’d get her later.

I already had a new plan.